EPIDAURUS FESTIVALThe Epidaurus Festival is a great celebration that has lasted 60 summers and has hosted some of the biggest names in theater, music and dance such as Maria Kallas, Saint-Seans, Rostropovich, Pavarotti, Peter Hall, The Theater No, the Beijing Opera and many other distinguished artists. The last decade a dynamic number of spectators have embraced the festival and every summer is growing. In the festival of Epidaurus important artists confront with the ancient drama, continuing and renewing a modern tradition that already exists six decades, while the Greek-Japanese co-production will be a bridge between the two cultures. 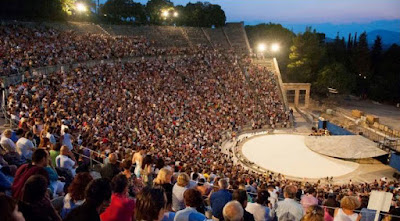