Xilokatro is a popular tourist destination of Peloponnese which attracts many travelers due to its natural beauty. The natural forest Pefkia near the sea and the beautiful beaches around this area are the main attractions of Xilokastro.
The town was gradually developed into an important tourist destination and today the traveler of the town will find a variety of hotels, rooms to let, cafes, bars, restaurants and super markets. Except its natural beauty, this little town hosts many cultural and athletic events.

Xilokastro means in Greek “wooden castle”. The name of the town derived from a wooden barrack which was built around 1260 (during the Frankish occupancy) and was located above the modern city on the west side of the hill “Kati ton Pefko”. From this position the barrack could control every movement in the Corinthian Gulf and the harbor of Aristonafton, which was the harbor of Ancient Pellini. In addition the location allowed optical contact with the castles of Zemenos and Pellinis and people from the barrack could alert the castles with smoke signals in case of an emergency. The locals named this barrack “wooden castle” and eventually the area with the surroundings settlements was given the name Xilokastro.
During the 18th century the area was still called Oxokabos and had only a few houses which were mainly used as warehouses. The largest part of the area was covered by a thick forest. Later the largest part of this forest was cleared and cultivated. The only part of the forest which remains until today is the forest Pefkias because it was near the sea and the soil was sandiness. The main product of the area was the raisin. Xilokastro produced large amounts of raisins and stored the product in the warehouses near the sea. Trains and boats from Xilokastro transferred the raisin to Patra. The raisin production determined the history of this town during the 19th century.
In the beginning of the 20th century this town attracted many travelers who came here to see the forest Pefkia, the elegant houses and the charming beaches. The famous Greek lyrical poet Aggelos Sikelianos built his holiday house at the edge of Pefkia and hosted many important personalities of the Greek culture. During the following years Xilokastro gradually developed into a popular tourist destination. Around 1970 a large building phase took place and many apartment blocks were constructed. Today Xilokastro is a town with contrasts, where many important cultural and athletic events take place.

Pefkia forest is the remaining part of a larger forest which existed until the 18th century. It is a natural pine tree forest between Xilokastro and Sikia. Around 83 plant species grow in this forest. Inside the forest you will find a lot of different pats for walking and also the chapel Agia Barbara. The famous Greek poet Kostas Kariotakis described this forest as “the green shore of the homeland”. Another famous Greek poet Aggelos Sikelianos was inspired by this area.
The church of Agios Blasios, who is also the patron saint of Xilocastro, is located at the central square of the town. It was built in 1908-1910 above the remains of a former church. The iconostasis of this church is a fine marble jewel. In the town you could also visit the church Panagia Faneromeni which was built in 1965-1970 with Early Christian architectural style. In the location “Psila Alonia” there is the church Agios Gerasimos which was built in 1620. Inside the church there are images created by Fotis Kontoglou.
In the town you will find the impressive villa of Aggelos Sikelianos. Aggelos Sikelianos was a famous lyrical Greek poet who built his holiday house in the area during 1911-1916. It is located in the nearby village Sikia on the east side of the forest Pefkia. The villa was made of stone and combines different architectural styles. The famous poet lived here along with his wife Eva Palmer until 1930. You will see the bust of the poet in front of the villa where he had hosted important personalities of the Greek culture, like Kostas Kariotakis, Kostis Palamas etc.
In the nearby village Sikia there is the Kiamil Bey Tower, which was constructed around 1750 and was the holiday house of Kiamil Bey. Kiamil Bey was the governor of Corinth during the Ottoman occupancy and was famous for his riches.
Only 6km away from Xilokastro, you could visit the Folklore Museum in the seaside village Kamari.
About 15km away from Xilokastro you could visit the archaeological site of Pellini. Ancient Pellini was excavated in 1931-1932 and is located between Xilokastro and Trikala Korithias. Graves, remains of ancient settlements and a vestige of a theater, all remains of the classical era have been found in this area. In addition some coins from the roman period have been found here. The harbor of Pellini was the port of Aristonauton, which was located in the position of the modern city of Xilokastro.

Pefkia beach is the long beautiful pebble beach of Xilokastro that extends in front of the homonym natural forest.
In the nearby seaside village Sikia you can visit one of the most beautiful beaches of the Corinthian Gulf, the Sikia beach. Near the beach there are cafes and restaurants.
Towards the east of Xilokastro, after the vacation houses, you will encounter many beautiful small coasts which are surrounded by pine trees and eucalyptuses.

West of Xilokastro between Kamari and Loutro you will find one of the most beautiful gorges of Greece, the Gorge of Fonissa.
About 18km away from Xilokastro you could visit picturesque villages of the mountainous Corinthia. For example you could visit the monastery Panagia Korfiotisa (about 20km away from Xilokastro) at the top of a hill in Korfiotissa village. The monastery was built at the end of the 17th century. The route to this monastery is beautiful and offers an astonishing view!
Except Korfiotissa village you could visit the lovely villages Ziria, Trikalochoria, Feneos and Stimfalia, where there is the homonym lake. Stimfalia is known from the 6th labor of Hercules. Hercules chased the “birds of Stimfalia” which had found shelter in the lake. He managed to drive them off the lake and killed them with his arrows. Also Evrostini is a picturesque village of mountainous Corinthia with natural beauty.
If you prefer sea over mountain then you could follow the seaside route east of Xilokastro until Korinthos. You will come across seaside resorts like Kiato and Vrachati, which are ideal for peaceful family holidays and offer beautiful coasts covered by pebbles. 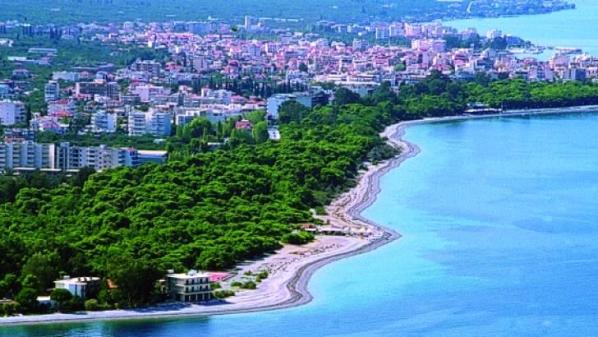