“ The city which symbolizes heroism and the frugal way of living”
Modern Sparta is located between the mountains of Taygetos and Parnonas at the valley of Evrotas River. It is constructed at the same location with the homonym ancient city and is surrounded by a fertile valley of olive trees, orange and lemon trees.
Modern Sparta was established in 1834 after the liberation of Greece from the Ottomans. The king Othonas signed the decree for the reconstruction of the city. The visitor can still see the neoclassical buildings, the large squares and the wide streets covered with trees.
Many travelers visit this legendary city where all those magnificent historical events took place. This is the place where the Trojan War started! Sparta was ruled by king Menelaos, the younger brother of Agamemnon. Paris, who was prompted by Aphrodite, grabbed Helen of Sparta, the most beautiful woman in the world and the wife of Menelaos. According to Homeric Poems this action initiated the Trojan War. Ancient Sparta is also famous especially for the courageous 300 Spartans who, led by their king Leonidas, fought bravely at Thermopylae against the innumerable army of Persians. Last but not least, the byzantine castle city of Mystras attracts plenty of people in this city.
Sparta and the surrounding lands are known for their tasteful products, like the olive oil, citrus fruit, local legumes and honey. Besides the products some of the local specialties that you should taste here is “sigklino” which is pork smoked with herbs and the homemade pasta.

In the Homeric Poems we read about Sparta which was one of the strongest Mycenaean kingdoms and Menelaos, the younger brother of Agamemnon, ruled the city. Helen of Sparta was the wife of Menelaos and was abducted by Paris, who was the prince of Troy. That event triggered the known Trojan War.
After the decadence of the Mycenaean civilization, around 1100BC the Dorian Invasion took place in Greece and the Dorians settled in the area of Sparta. Gradually the city of ancient Sparta was formed with three social classes. It was a society that promoted the frugal way of life and was a city of warriors. The warlike nature of the Spartans was obvious throughout the history of the city. At the battle of Thermopylae in 480BC 300 Spartans fought bravely against the army of Persians. Although they all died in the battlefield, they caused such a big damage at the countless army of the Persians and helped the rest of the Greeks to prevail.
Except the foreign enemies, Spartans are known for their rivalries with other Greek ancient states as well. Their number one enemy was, of course, the Athenians. Their cultures were diametrically different and caused many conflicts. Their worst conflicts took place during the Peloponnesian War (431-404BC) when Sparta and its allies prevailed over the Athenian alliance. While Sparta was busy fighting with other cities, Macedon gradually became more powerful and dominated Greece. This fact initiated the decline of Sparta which gradually lost its glory during the subsequent years.
The city was unimportant for many years until the arrival of the crusaders in the area around 1205. The Franks dominated the area and in 1249 a Frankish castle was built at a mountain peak of Taygetos, the famous Mystras. Some years later, the Byzantines dominated the area and captured the castle of Mystras. Using Mystras and the area of Sparta, the Byzantine Empire begun to conquer Peloponnese. However in 1460 the whole area was subjugated by the Ottomans.
In 1821 the residents of the area rebelled against the conquerors and until 1828 they managed to liberate the castles of the area and fought against Ibrahim Pasha. In 1834, the modern city of Sparta was constructed in the place of the ancient city.

In the center of the city you will find a statue of Leonidas along with the cenotaph of the ancient king.
The Archaeological Museum of Sparta exhibits findings from the prehistoric settlements in Laconia and archaic and roman sculptures. In the seven halls of the museum there are findings that date back to the Neolithic Period until the Late Roman years.
The olive and Greek olive oil museum is a must here! You will be informed about the history of olive oil since the antiquity. Also in the museum you will find out all about the oil presses from the byzantine years until the 20th century.
The Koumantarios Art Gallery of Sparta was inaugurated in 1982 and is an annex of the National Art Gallery of Athens. The gallery exhibits oil painting from European artists from the 16th until the 20th century.
Close to Sparta, travelers could visit some prehistoric locations like Menelaion, where there are Mycenaean remains and a sanctuary which was dedicated to Menelaos and Helen of Sparta. Also about 6km south of Sparta there are the remains of a sanctuary which was dedicated to the Apollo of Amikles.
From the ancient Sparta there have been excavated some monuments which you could visit in the archeological site. The most important monuments here are the sanctuary of Athina, the ancient theater south of the Acropolis, a circular building of unknown purpose, remains of ancient stores and the remains of a byzantine basilica. In addition, close to the banks of Evrotas River there are the remains of the temple of Orthias Artemis, which was connected with education of the youth of the Spartans.
Only 5km away from the modern city there is the abandoned byzantine castle city of Mystras. During the heyday of Mystras, many scholars and artists lived here. The castle city is well preserved and even today you can see the castles, the palace, the houses, the churches and the monasteries.

Sparta is surrounded by two large mountain ranges, Parnonas and Taygetos Mountain. Parnonas Mountain is ideal for those who want to visit picturesque villages; each of them has something different to offer. Traditional taverns await for you to taste all the local specialties. It is ideal also for those who love activities as it provides many signposted hiking routes and climbing opportunities. However the mountain that is tightly connected with the history of Sparta is of course Taygetos, the “sacred mountain” of Spartans. The top of the mountain has 2.407meters and many nature lovers reach the top in order to admire the “Pyramid effect” which can be seen during the early morning hours. Like Parnonas there are many beautiful villages to visit, archaeological and historical places and amazing hiking opportunities. In Xirokabi village you will see the old stone houses and the temple of St. Nikonas with the wall paintings of the 14th century. Koumousta is a medieval village on Taygetos Mountain where you will find some beautiful routes for hiking as well as some stone fountains with fresh water. Anavriti is also a mountainous village with many hiking routes, flowing waters and temples. And those are only a few of the plenty of choices you have in this amazing mountain.
About 1½ hour away from Sparta there are the magnificent caves of Diros. The lake cave Vlichada can be visited by boat in a tour that lasts 45 minutes. The cave Katafigi astonished the visitors with its impressive stalactites and stalagmites.
About 85km southeast of Sparta you could visit Monembasia. Monemvasia is one of the most well preserved castle cities of Greece which is built at a red rock almost separated by the mainland. Its strategic position was of great importance during the history of Greece during its battles. It also served as a trading center where the ships were equipped with products like wine, olive oil and silk in order to transfer them all over the Byzantine Empire. 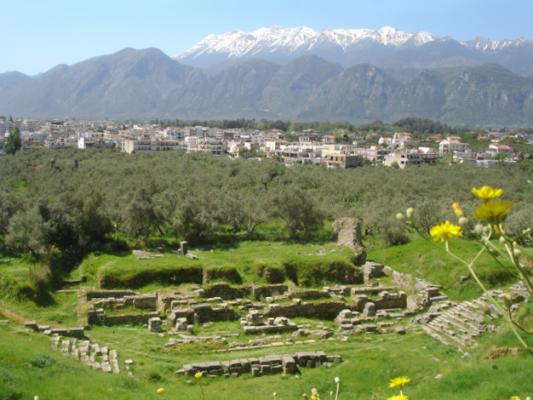