Pirgos Dirou is a popular destination known for its natural beauty. The extraordinary Lake Caves of Diros are only about 3km away. The tour of the caves is done mainly by boat and only the part on foot. While gazing at the impressive formations of the stalactites and stalagmites you will be immersed into the mystery of the nature.
Pirgos Dirou offers a variety of hotels and apartments for your accommodation. This destination is also known for the traditional towers. Some of them have been reformed into amazing hotels. Don’t leave without visiting a traditional restaurant around the area and taste some of the local delicacies of Mani and the Mediterranean cuisine with the exceptional olive oil and honey. Traditional “lalagia”, smoked pork and “sygklino” are only some of the specialties you will find around this area.
Pirgos Dirou is a historical village of Mani where the residents of Mani defeated Ibrahim in June of 1826. About 3500 soldiers landed at Diros in 23rd of June in 1826. Some women saw the forthcoming invasion and warned the priests, the elderly and the children in order to protect themselves. The women of Mani holding scythes fought against the army of Ibrahim in the battle of Diros while in the same time the men of Mani defeated the army of the Egyptians of Ibrahim in the battle of Verga. The courage and the boldness of the women of Mani saved many lives and in the honor of these women there is a statue dedicated in them in Pirgos Dirou and another one in the harbor of Diros both holding the scythe which was used as their weapon.

The protagonist of this area is of course the Diros Cave. It is consisted by three separate caves: Vlyhada (or Glyphada) which is the only accessible one, Alepotrypa and Katafygi. The tour lasts about 45 minutes and the largest part is done by boat. In the exit of the caves you will find the Neolithic Museum of Diros. Here there are the most representative findings of the cave Alepotrypa, like tools, jewels, figurines, ceramics etc. Alepotrypa was used as a settlement during the Late Neolithich Period (4000-3000BC).
At the south part of the village you will find the imposing Sklavounakos Tower which is worthy of your visit. It is an imposing tower with height of 25 meters built for the chieftain Sklavounakos. The tower house was used during the Greek War of Independence for the defensive needs of the residents. The building complex included the six-storey tower, tanks, a family chapel with graveyard and a paddock. The surrounding walls are 5 meters high and in the northern part of the complex there is the house. At the north there is a walled yard. The six-storey tower was built in 1821 and is located at the east side of the precinct.

Next to the caves of Diros you will find the beautiful beaches of Diros, covered by thick white pebble. You can’t resist in these crystal clear water! There is a small pebble beach which is surrounded by the nearby palm trees offering natural shadow. Near this beach there is a larger one. The access to these beaches is done by different routes however someone could go from the one beach to the other by swimming around the rock.

There are marked paths around the wider area (Municipality of Oitylo) which are ideal for hiking throughout the year. Close to Pirgos Diros you will find the route “Pirgos Dirou – Korfi Profiti Ilia”. The route starts next to a water tank and ends at the top of the slope. It is advisable to start this route in the morning in order to have shadow during the hiking. At the top you will find the homonym chapel Profitis Ilias. The view from this point is astonishing.

Mani is a historical district of Peloponnese. The lands of Mani are considered inhospitable, rough and historically the residents of these areas were described as hostile and harsh. The area of Mani was very important especially during the Greek War of Independence. Pirgos Dirou is part of the Mani district. Around Pirgos Dirou you could visit plenty of other historical settlements of Mani and meet their singular history. Fourniata , for instance, is a powerful settlement of the area with the fortified complex of the chieftain Sklavounakos. Charia is one of the oldest and the most representative settlements of Mani with its characteristic architecture and the known towers of Arapaki family. Here you could also admire some of the most important examples of the byzantine ecclesiastical architecture. Important byzantine churches there also in Gklezi village.
Towards the North, only 7,7km north of Diros you will find Areopoli, a historical town of Mani and the cradle of the famous family of Mavromichalidon. You can almost sense the warlike spirit of this town which took its name from the Greek God of war Ares. You could visit the Taxiarchis temple, where the residents of Mani participated in the liturgy right before they swore “Freedom or Death”, the known Greek phrase which meant that they would either defeat the Turks or they would die fighting. Around the area you will find the traditional tower houses of members of the Mavromichali family. The Pikoulaki Tower was constructed in 1850 and is a perfect example of the fortified houses of Mani. About 5km away from Areopoli there is the picturesque seaside Limeni village.
Close to Areopoli you could also pay a visit to the traditional village Oitylo. Oitylo was built on a plateau north of Mylolagados gorge, where the ancient city Oitylo was located in the antiquity. The ancient city according to Homeric poems was involved in the Trojan War and belonged to the kingdom of Menelaus. North of Oitylo you will find the remains of the Kelefas castle which was constructed by the Ottoman Empire in 17th century in order to control the area.
South of Pirgos Dirou you will also find plenty of traditional settlements to visit and continue your tour in Mani. Nikandri village is one of them with the traditional church of Ai-Giorgis with the beautiful wall paintings. Close to Nikandri you could visit Charouda village. Don’t miss the famous temple of Taxiarchon. The church was built during the 11th century and has a stern that is considered to be either ancient or roman. If you travel even more towards the South you will find even more historical settlements with traditional tower houses, byzantine churches and monuments.
Just before arriving to Gerolimenas you will pass through the Vathia village. Towers made of stone and the wild beauty of the environment charm the visitors of this historical place.

The sacred port of Peloponnese Gerolimenas is about 18km south of Pirgos Dirou. Traditional tower houses, delicious food, crystal clear water, a lot of stone and sun wait for you here! If you are in mood to travel a little bit further try to reach the southernmost part of the mainland of Europe, Cape Tainaro and its lighthouse. 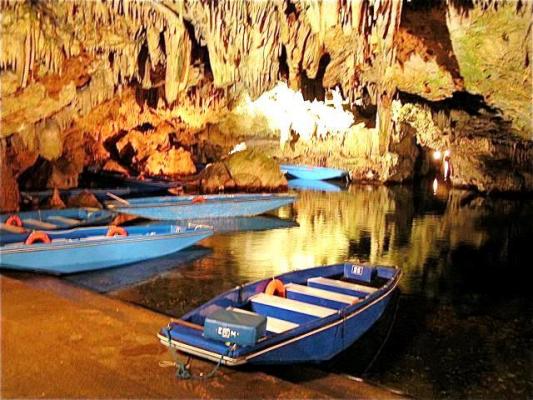