Monemvasia is the little historical city built on a mass of rock which is connected to the mainland by a narrow bridge of 130 meters. The name Monemvasia, which in Greek meant “the only access”, came from the singularity of this place.
This destination is situated at the southeast side of Peloponnese in the county of Laconia. It is also called the Gibraltar of the East because of the similarity with the rock of Gibraltar. The unique shape of this place is due to a powerful earthquake that took place in 375AD and separated this land from the mainland. Today the rock of Monemvasia has 1500 meters length, 600 meters width and its height is about 200 meters. It is one of the most photographed and popular destinations of Greece with tourist activity not only in the summer but throughout the year. Inside the settlement, cars are out of question so be prepared for some walking.
The whole city is a part of the medieval castle and the moment you pass through the main gate you feel like you travelled through a time capsule. The city is divided in two parts, the Lower Town and the Upper town which is placed on the plateau at the top of the rock.
Monemvasia historically became the Apple of Discord among many states including the Byzantine Empire, the Franks, the Venetians, the Pope and the Ottoman Empire. However the residents of Monemvasia preserved their identity and remained close to their roots throughout the different occupancies.

The history of this city goes way back in time and the castle changed hands many times. The lack of water of this rocky, uncultivated land had great impact on the architecture of the town. The houses were built by stones, as they could find in large amounts. The rain water was their only source of water and therefore each house was equipped with its own water tanks in order to collect the rain water.
The Early Helladic settlement of Monemvasia was initially built 8000 years ago. During this period Monemvasia was called Cape Minoa and was used as a port, especially for those who were travelling from the mainland to the important centers of Cyclades and Crete. This activity of the port continued also during the Mycenaean and the Late Helladic Period.
The powerful earthquake that hit the area in 375AD resulted in the geomorphologic changes which transformed the cape into an island. Due to the earthquake many important cities around Laconia, like Vies, Plytra, Asopos and Epidaurus Limera totally or partly sunk.
During 582-583AD the Laconeans established their settlement in Monemvasia. Around that time Arab and Visigoth invasions took place in Laconia and in Peloponnese in general. Therefore the Laconeans found shelter in Monemvasia, which was naturally fortified by the rough natural environment of this place. The Laconeans established their first settlement in the upper part of Monemvasia which is called Upper Town or Goulas. The initial bridge which connected the island with the mainland was constructed during this period and the city was finally named Monemvasia.
The fortifications of the city were completed during the Byzantine Period and Monemvasia became the administrative and religious centre of Peloponnese regarding the territories of the Empire. Due to its strategic position, Monemvasia was also the starting point of the battleships between the Byzantine Empire and the Arabs. Monemvasia was a very important naval and trading spot and this fact resulted in the gradual growth of the Lower Town after 900AD.
In 1204 the Frankish Empire took over the byzantine state. The Franks tried then to occupy Monemvasia which however resisted and fought the conquerors over 40 years. It became a matter of honor for the Frankish knights to conquer this place. A siege by the land and the sea which lasted 3 years resulted finally in the surrender of the residents which was however under certain conditions. The residents demanded their freedom, exemption from the obligation to serve military service in the armies of the conqueror and also exemption from the taxes.
Monemvasia was liberated from the Franks after the Byzantine Empire prevailed. During these years Monemvasia earned plenty of economical and administrative privileges, like the exemption from custom duties and the taxes. In addition the ships of Monemvasia won a free pass throughout the Byzantine Empire.
The heyday of Monemvasia, also known as the golden age, was during the 13th -14th century AD. The population during this time was calculated to 8000 residents and there were about 40 churches in the city. A new building phase also took place as the space was limited and the houses and the streets needed reformations. Important personalities lived in this place like Ioannis Katakouzinos who became the Emperor of the Byzantine state in 1341AD. The wine which was produced by local people of Monemvasia and was known since the Antiquity became during these years a luxury product and very popular among the royalty. The wine was called Malmsey or Malvoisie and even Shakespeare mentioned it to his play “Richard III”. In 1545 the Turks prohibited the production of this wine and unfortunately the production procedure was forgotten.
Monemvasia was the last stronghold of the Byzantine Empire and surrendered to Venetians in 1463. Monemvasia was also the first liberated castle of Peloponnese after the outburst of the Greek Revolutionary War against the Ottoman Empire. The fortress was liberated in 23rd of July in 1821 and raised the morale of the remaining occupied cities. Monemvasia also enhanced with supplies the Cretans during the Cretan Revolt and also the cities Tripolitsa, Corinth and Naflio while they were besieged.
After the liberation of the city the rivalries over the sovereignty of Monemvasia reduced the prestige and the population of the city. During the 20th century people deserted the Lower Town and relocated to Gefira which is the part of the mainland across the island of Monemvasia.

Nowadays the city is developed as a top destination with a variety of accommodation options, traditional cafes and restaurants and gift shops. In the square of the city you will see the cannon, the church of “Elkomenos Christos” and the archaeological museum. From this part of the city starts the path that leads in the Upper Town and the castle.
The visitor of the city shouldn’t miss the opportunity to reach the top of the castle and admire the vast sea and the traditional settlement. In the upper city you could also visit “Agia Sophia”, one of the most important byzantine churches in the Peloponnese. It was built in 12th century and strongly reflects the features of the byzantine period.
While walking in the narrow streets of the city, you will come across the mansions of the rich merchants of the past and many chapels that worth a visit. If you pay a little more attention you will discover the bust of Yannis Ritsos, the internationally known Greek poet, in front of the house he used to live.
Across the rock of Monemvasia, there is a small seaside settlement called Gefira (meaning bridge in English) with a lot of cafes and restaurants from which you could admire the outstanding landscape.
While visiting this place take the chance to taste the handmade pasta, the fried cheese pies and the local sweets. Also the wine production in the area has great tradition and therefore visitors shouldn’t miss a wine tasting.

Swimming in the shadow of the castle city is a unique experience. The picturesque harbor Portelo is a good swimming option for those who are not afraid of dipping in the water and of the shingles.
For more conventional ways of swimming after you leave the bridge of the castle city you turn left and you will find the Gefira beach, a long shallow beach.
Pori beach is a narrow beach situated 4km in the north of Monemvasia with great view of the castle.
About 6km from Monemvasia there is Xifias beach, a beautiful sandy beach with a variety of taverns and rooms to let. This beach is the one which locals tend to visit.

During your stay in this area you could organize a day trip to the picturesque harbor of Gerakas. While you are on your way you will view the beautiful landscape of the lagoon. Take a breath and enjoy the tranquility of this place along with the tasteful food, the local fish taverns will offer to you.
For more persistent travelers and experienced drivers the wild beauty of the route from Monemvasia to Kyparissi village will reward you! You will be driving at the edge of a cliff with a lot of cypresses in order to arrive in Kyparissi, the village which has the air of an Aegean island.
Last but not least, Neapoli Voion is about 38,5km away from Monemvasia and also a beautiful place to visit. From there you could visit one of the most impressive caves in Europe the Cave of Kastania. The island of Elafonisos with the amazing beach is connected with Neapoli through frequent ferries from the harbor Pounta. 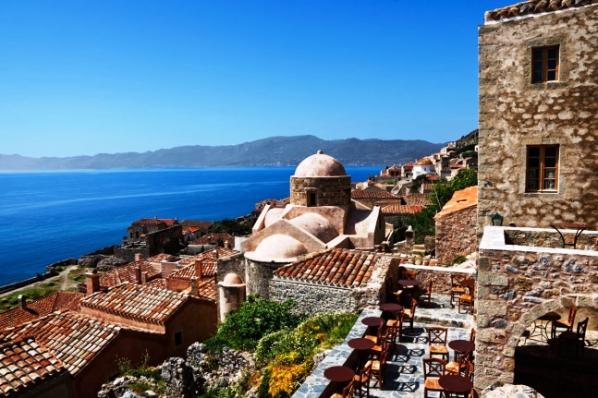 Make sure to visit this area with one of our holiday packages:
Laconia Coastal Biking Tour
Tweet