Megalopoli means “Big City” in Greek and was one of the most important ancient cities of Peloponnese. Modern Megalopoli was built close to the ancient city and today has more than 11.000 residents. Besides the surrounding antiquities, Modern Megalopoli is known for its thermoelectric plants and the lignite mining which are the main economic activities in this city.
The history of the city starts in 370BC when Epaminondas established the ancient city in order to gather all the Arcadians and created a city which was the opposing force to the neighboring Sparta. At some point the city allied with Macedon and according to historic references, Philip II of Macedon and Alexander the Great visited the city at some point. The residents of Megalopoli built an arch in the Ancient Agora which was named after Philip II in order to honor him.
Modern Megalopoli was established after the liberation of Greece from the Ottomans. In 1960, people started lignite mining in the area and the two big thermoelectric plants were constructed which are the main features of the modern city.

The archaeological site of Ancient Megalopoli can be found only 3km away from Modern Megalopoli. The excavations on the area revealed spectacular monuments of the city like the ancient theater, the “Vouleftirion”, the ancient Agora and the remains of the walls of the city. The city was established in 370BC by gathering people from 40 cities of Arcadia in one big city. The city became one of the most important cities as its findings reveal. The city was declined during the Late Roman Period and during the Middle Ages the residents of this city relocated to other neighboring settlements.
Probably the most important monument here is the Ancient Theatre. The Ancient Theatre of Megalopoli was the biggest in ancient Greece with a capacity of 20.000 viewers. It was built around 370BC and was used for cultural events and political gatherings.
The theater was constructed across the Ancient Agora. Here you will find the remains of important sanctuaries, like the sanctuary of Zeus and the arcade which was built in the honor of Philip II of Macedon.

The mountain Likeo, which was believed to be the place where Zeus was raised, is about 30km away from Megalopoli. The view from this mountain is amazing! The visitor can see from here the mountains of Mainalo and Taygetos and the fertile valley of Alfios River. The mountain is tightly connected with the rich history of Arcadia. At the fertile slopes of this mountain many ancient Arcadian cities were established.
At the top of the mountain, which is called Ai-lias, there was the sanctuary of Zeus at 1400 meters altitude. The sanctuary included the devotional altar of Zeus and the “abaton”, the inaccessible mosque. It was strictly forbidden to the mortals to enter this area, which is also known as the place where the shadows are absent! At a lower level (1200meters) there were some other facilities of the sanctuary. Here you will find the remains of the sanctuary of Panas, the guesthouse, a big arcade and fountains. At a big plateau at the lower part of the slope you can still see the remains of the Stadium and the Hippodrome, where the athletic and musical games called “Likaia” took place.
At the east side of Likeo mountain there is the archaeological site of Ancient Likosura, one of the ancient cities that developed in this area. It is located only 12km away from Megalopoli and you will find beautiful monuments, like the temple of Despoina, the Megaro, the big arcades, the altars and the ancient fountain. Pausanias, the Greek geographer (2nd AD), wrote about ancient Likosoura that it is the first city that sun saw! Close to the archaeological site, there is the archaeological museum of Likosura which exhibits the findings of the area.

In Vasta village there is the picturesque chapel of St. Theodora, which was probably built in 12th AD. This chapel has been named as a miracle of nature because of the 17 huge trees which are supported by the roof of the chapel. Many scientists can’t even today explain this unique phenomenon. Below the church there is a small river which waters the trees. According to the religious tradition St. Theodora prayed before she died that her hair would become trees and her blood would become the river which will water them.

About 17km away from Megalopoli there is the settlement of Falesia. The visitor sees here ancient walls, byzantine churches and monasteries, castles and monuments which transfer you back in time. In Falesia there is also the Folklore Museum where the visitor has the opportunity to see the traditional clothing of the area, the agricultural tools and the household items which people used from the beginning of the 19th century until the middle of the 20th.

Karitena is located 18km northwest of Megalopoli and shouldn’t be omitted from your to-do list while you’re here. It is a magnificent traditional village of Arcadia which has been described as the “Toledo of Greece”. The village is built at the top of a hill and surrounds the medieval castle which was built during the 13th century AD. The castle was used during the Venetian and the Ottoman occupancy in Greece. It was repaired by Theodoros Kolokotronis in 1826 when it was used by the Greek people as a shelter and a starting point against Ibrahim Pasha of Egypt. Walk around the village and admire the beautiful combination of the architectural monuments of Arcadia, the beautiful stone houses, the cobbled alleys and the nature. In Karitena you could also visit historical churches, picturesque cafes and traditional restaurants. Every first Sunday of August, travelers from all over the Greece visit the village in order to buy handmade embroideries and traditional homemade products.

South of Megalopoli there is a notable village, Leontari. The village was very important during the history of Greece. The village was built in the position of the ancient city of Lefktra which was inhabited during the Archaic and Hellenistic Period. After 31BC the settlement was declined and became a small settlement. The area became an important commercial and administrative centre after the construction of the Frankish castle at the top of a hill. The strategic position of this castle helped the area to thrive during the byzantine years. The castle was also important during the Venetian and Ottoman occupancy while it also served as a starting point of the Greeks during their battles against the Ottomans. Today you can still see the remains of this medieval castle along with other important monuments, the traditional architecture of the settlement and the byzantine churches and monasteries. At the central square of the village you will find the byzantine temple of Agion Apostolon (14th AD) with the marble iconostasis, the beautiful wall paintings and the mosaic floor. If you wish to explore the village a little bit more you will find more architectural monuments like the abandoned railway station and the Bridge of Karnionos River. 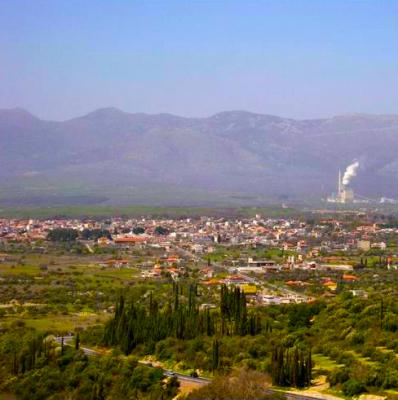