You may have heard that Cleopatra was a fan of milk baths, but what was the secret of Helen of Troy, also known as Helen of Sparta? The answer is believed to be the thermal baths she was having in this little village. This traditional belief resulted in the name of the village “Loutra Oraias Elenis” which is Greek for “The baths of the beautiful Helen”.
This village is situated at the northeast part of Peloponnese on the road from Corinth Canal to Epidaurus. It is a popular destination especially among the Athenians. The distance by car is about 1 hour from Athens and therefore many Athenians have built their vacation houses in the area. There are some beautiful beaches around this area, picturesque villages, traditional restaurants and world known archaeological sites. Therefore, tourism is the number one economic activity of this village.

The settlement of Loutra Oraias Elenis offers a long pebble beach which is organized and equipped with taverns and café bars that attract a great amount of visitors. For the more courageous swimmers the famous thermal baths are situated right before the main beach of the settlement. A few minutes away from Loutra Oraias Elenis you will encounter the Kato Almiri village and the homonym Almiri beach which is in fact the continuation of Loutra Oraias Elenis and practically the same beach. In this area there is also a variety of restaurants, beach bars and cafeterias in your service.
About 2,5Km north of Loutra Oraias Elenis you will find the large beautiful beach of Kechries and according to many people the best in the Saronic Gulf. In the area you will find many options for your accommodation, restaurants and cafes. Don’t forget to visit the harbor of Ancient Kechries while you are in this area. From this harbor Apostle Paul departed towards the Ancient Rome in order to teach people the precepts of Christianity.
Southeast of Loutra Oraias Elenis, just a few kilometers away, you will find Katakali, a small beautiful bay covered by small pebbles.

About 14Km away from Loutra Oraias Elenis there is Sofiko, a beautiful village that is surrounded by thousands of pine trees. This settlement was established in the 14th century AD and the residents played an important role during the Greek War of Independence in 1821. This hospitable village stands out for its tradition and the innumerous ecclesiastical monuments. About 30 of these monuments are cataloged. One of them is the Monastery of the Assumption of Mary. For the building of this monastery people used materials from the ancient Greek sanctuary of Aphrodite and people can still see some of the ruins around the monastery. Here you will find plenty of beautiful hotels to spend the night if you wish as well as some beautiful beaches.
If you are in mood for some fresh fish you could visit Korfos, a small fishing village about 30Km south from Loutra Oraias Elenis. It is in fact a small bay protected by the winds with hospitable people who are mainly occupied with fishing, olive oil production and tourism. You will find a pebble beach to enjoy swimming and of course fish taverns next to the beach where you could taste fresh fish and local specialties. It is an ideal destination for families and for those who seek peaceful vacation.
Last but definitely not least, you could visit the archaeological sight of Epidaurus, the ancient theater which still hosts important cultural events and theatrical performances. 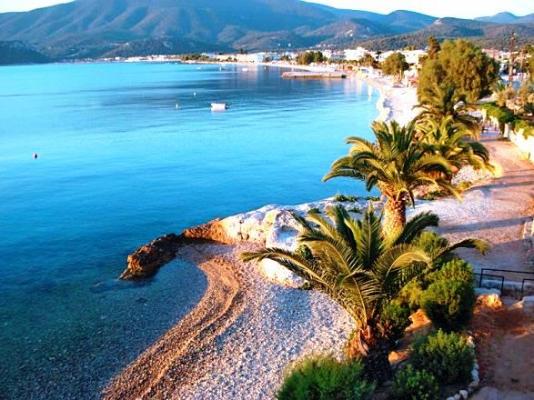