“The glorious ancient city, the medieval castle and the Corinthian raisin”
Korinthos is a seaside city with imposing hills and important archaeological monuments. It is located at the east side of the Corinthian Gulf, northeast of Peloponnese. The visitor of the modern city will find a beautiful city with wide streets, squares and a picturesque harbor.
During the Antiquity it was one of the most important cities of Greece and today you can still find the glorious remains at the archaeological site of Ancient Corinth. The impressive castle Acrocorinth at a nearby hill reveals the impact of this city during the medieval years.
The products of the area are also part of the city’s rich history. The Nemean wines, which are worldwide known, were famed since the antiquity. The Corinthian raisin was the main exportable product of Peloponnese during the 19th century.

In the area of Korinthos there are some remarkable beaches, like the central Kalamia beach. It is the most popular beach of the town with many restaurants and cafes around the area. The beach is covered by thin sand and pebbles. Close to Kalamia beach, just before the ancient port of Lechaeo, there is the sandy Kantare beach. The beach is organized so you won’t have a problem to find a café or enjoy your meal here and the shallow water makes it ideal for the families.
West of Korinthos you will also find the historical village Lechaeo with its beautiful beach. On this beach you will also see the remains of an Early Christian Basilica. Close to Lechaeo, you will also find the Kato Asos beach, which attracts all kinds of visitors, from families to young people. Another charming place to visit close to this area is Vrahati beach. This popular beach is covered with pebbles and has shallow water. You will find many cafes and restaurants to visit while you’re here.
Loutraki beach is a popular beach with 3,5km length and plenty of activities, cafes and restaurants for the visitors. Another popular beach close to Korinthos is Agioi Theodoroi beach. This organized beach which attracts many visitors and offers many taverns to eat fresh fish and picturesque cafes to enjoy your coffee.
South of Korinthos city and towards Ancient Epidavros there are also many beautiful coasts to visit. The most popular are the organized sandy Krifi beach, the sandy and pebble beach known as Istmia beach, Kechries beach known for being the second port of Ancient Corinth and Loutra Oreas Elenis beach, known as the place where Helen of Sparta took her bath.

Ancient Corinth was one of the most important ancient cities of Greece. The area was inhabited already since the Neolithic Period and in 900BC the Dorians settled in the area. Initially the city was dependent on Argos and since the 8th BC the city gradually became autonomous. Trading and shipping became the main activities and the city founded two colonies, Corfu and Syracuse.
The controversy between Ancient Corinth and Corfu was one of the reasons of the Peloponnesian War (431-404BC) between Sparta and Athens.
Initially Ancient Corinth was an ally of Sparta but in 395BC the city turned against Sparta. This event caused the Corinthian War (395-387BC).
In 335BC the city was subjugated to the Philip II of Macedon, who was the father of Alexander the Great. In 243BC the city joined a big confederacy which was called the Achaean League. After 200BC Corinth became the capital of this powerful confederacy. However in 146BC the city was completely devastated by the Romans and the city slid into obscurity for a long period. In 44BC Julius Caesar decided to rebuild the city and Corinth became important again. In 53AD Apostle Paul came to this city and taught the principles of Christianity. The city was destroyed once more in 521 by powerful earthquakes that stroke in this area.
The medieval history of Corinth is directly connected with the fortress of Acrocorinth. Since 12th AD the city was dominated by foreign powers like Normans, Francs, Byzantines, Turks and Venetians. In 1826 a powerful earthquake devastated again the city and the modern city was rebuilt near the sea, 9km away from the ancient one. In the position of the ancient city remained only a small settlement which is today called “Palaia Korinthos” (Old Corinth). “Palaia Korinthos” is near to the archaeological site which was initially excavated in 1896.

The metropolitan church of Apostle Paul is a significant sightseeing of the area. Apostle Paul visited the area in 53AD and lived for some time in the old city. During his visit he taught people the principles of Christianity.
The archaeological site of Ancient Corinth will transfer you back in time when this area was one of the most important cities of Ancient Greece. The archaeological site is located about 9km southwest of Korinthos. As soon as you enter, straight ahead you will see the ancient Agora. At the west side of the Agora you will notice the foundations of six small roman temples. At the centre of the Agora there were stores that existed during the Roman and the Byzantine years. South of the Agora there were two rows of 15 main stores which surrounded the tribune that was the monumental dais from where the roman governor appeared to the commons. This tribune was used also by Apostle Paul in 52AD in order to speak to the roman proconsul in favor of Christianity. At the east side of the Agora there are still the remains of the Basilica Julia, which was built at the form of a basilica and took this name due to the statues of Julius Caesar and Augustus which existed inside this building. In front of Basilica Julia, the excavations revealed remains of a Hellenistic stadium.
During Antiquity the access to the Agora was done through “Lechaiou Street”, which was a wide paved street with stores. This street connected the ancient city with “Lechaio”, which was the harbor of the city in the Corinthian gulf. At the east side of “Lechaiou street” you can still see important monuments like the remains of “Pirinis fountain”, the Apollo Precinct and the roman baths which were built above the remains of the ancient baths. At the west side of “Lechaiou Street” there are the foundations of a roman basilica.
West of this roman basilica there are important monuments like the Temple of Apollo which was built between 550-525BC and is one of the most important archaic temples of Greece. It was a Doric peripteral temple and you can still see the 7 columns out of the 38 in total which supported the peristyle. North of this temple you will find the “Northern Agora”.
At the southwest side of the archaeological site you will find the Archaeological Museum which is also surrounded by some important monuments like the roman temple of Octavia. North of the museum you will see the Glafki fountain. Glafki was the daughter of King Kreontas. According to the myths, Glafki wore a mantel which was sent to her as a gift by Mideia. Mideia wanted to take revenge from Glafki and had enchanted this mantel. Glafki wore the mantel and her body was covered in flames so she fell into this fountain in order to get rid of the flames.
The remains of the ancient theater can be seen today at the northwest side of the archaeological site. The theater was built initially in 4th BC and was rebuilt in 1st AD. South of the theater you will see the roman odeon which was renovated by Herodes Atticus in 165AD. This odeon was used for cultural events and later as an arena.
North of the theater you will find Asclepeion which was the sanctuary dedicated to Asclepius, the god of medicine. The temple was built in 4th BC and had an inaccessible place to the commons (avaton) where the patients stayed during the night. Next to the temple you will find Lerna fountain and the remains of a gymnasium, which was a training facility.
After the visit at the archaeological site you could visit another amazing monument of the city, Acrocorinth, the fortified acropolis of Korinthos. It is the oldest castle of Peloponnese and can be found at the top of a hill about 3,5km away from the Ancient Corinth. The medieval fortifications were constructed above the ancient walls. The byzantine lord Leodas Sgouros, while he was on his horse, fell from the walls in 1210AD in order to avoid being captured by the Franks who invaded the castle. The castle was occupied from times to times by the Venetians and the Ottomans.
Besides the Archaeological Museum of Ancient Corinth, inside the city you will find some interesting museums to visit. The Ecclesiastical Museum was founded in 1973 and exhibits many religious relics of the local religious history, like images, manuscripts, gospels, vestments and photos. The Historical-Folklore Museum exhibits traditional agricultural tools, utensils, costumes, embroideries and many more elements of the traditional way of life in this area. The collections date back at the beginning of the 19th century until the middle of the 20th. In addition the Municipal Art Gallery of the city exhibits the paintings of the Greek artist Sotiris Pilarinos.
Outside from Korinthos you could visit Corinth Canal which is one of the most impressive technological achievements in the area. Even since 602BC the tyrant Periandros had stated the opinion that a canal was needed in this area in order to avoid to expedite shipping and trading activities in the area. He built then the famous “Diolkos”, the paved street, where small ships were dragged by the slaves in order to avoid the circumnavigation of Peloponnese and the dangerous spots of Cape Malea and Cape Tainaro at the south of Peloponnese. Its strategic position resulted in the construction of the fortification walls “Examilion” which were built before 400BC and were preserved until the Byzantine Period. After Periandros many emperors of the Roman Empire, the Venetian and Ottoman occupiers also tried to continue the construction of the canal but nothing radical happened until 1880 when the systematic operations started. The Corinth Canal was completed in 1893. Today you can walk on the bridge of the canal and enjoy a breathtaking view. Alternatively you could take one of the tourist boats and enjoy a cruise of the canal. Some adventurous travelers could even try bungee jumping from the Corinth Canal.

The beautiful seaside village Lecheo is only 8km west of Korinthos. The area is known since the antiquity (6th BC) as one of the two ancient ports of Korinthos (Ancient Kechrees was the second). The visitor can still see the remains of this ancient port and the remains of an Early Christian Basilica (5th AD) which was constructed in the honor of Leonidis and the seven virgins who martyred during the persecutions of Dekiou in 251AD.
From the east side of Korinthos you have plenty of seaside locations that you could visit. Starting from Kavos and heading south you will encounter beautiful seaside destinations like Loutra Oraias Elenis and Korfos. Korfos is known for its fish taverns near the pebble beach of the bight. South of Korfos and about 60,5km away from Korinthos there is the archaeological site of Ancient Epidaurus with the renowned ancient theater.
The legendary Nemea is a wonderful option for a trip close to Korinthos. Here was the place where Hercules killed the Nemean Lion and the Pan-Hellenic Nemean Games took place during the Antiquity. There is a notable archaeological site here with the temple of Zeus and the stadium. Don’t forget to try the famous “Agiorgitiko” wine which is often called by the locals “the blood of Hercules” due to the deep red color of this wine variety. 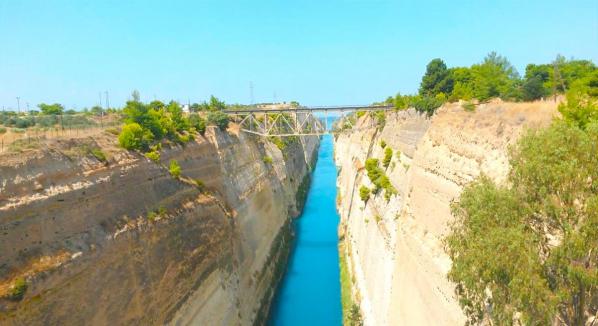 Make sure to visit this area with one of our holiday packages:
Archaeology Tour
Archaeology Activity Tour
Hotels you can stay:
MANTAS HOTEL
Activities you can perform:
Sailing
Water-sports
Tweet