You will find Kiparissia built amphitheatrically on the foot of the mountain Aigaleo also known as Psichro. It is located in the southwest of Peloponnese viewing the Ionian Sea and offers an amazing view during the sunset. It is the third largest town in population in Messinia. The beautiful beaches and the rich history of this area have made this little town a popular destination. The town offers all the necessary amenities the traveler might need.
Georges Clemenceau, the known French politician, visited Kiparissia in the beginning of the 20th century in order to inaugurate the train station in the area. He was completely charmed and he stated that this city offered him the most beautiful sunset he had ever seen during his journeys.
In the “lower city” you will find the modern part of the city with the apartment blocks. While following the central street upwards you will end up to the “upper city” which is like a history flashback! The upper city is in fact the old city with the traditional houses and mansions and the historical monuments. The most important one is of course the famous and imposing Castle of Arcadia. Scattered around the traditional old city you will come across some fountains which were used as trading spots in the past. In the old city there is also the old watermill which was one of the many in the region and operated until 1974. This old watermill was recently renovated and today you could still purchase some wheat flour as well as some other traditional products of Kiparissia.
While visiting this area try some local specialties like “pasto” (which is corned meat), boiled goat meat, fried cod with “skordalia” (a puree of potatoes and garlic), sausages and of course the roasted suckling pig, which is mainly served during the festive occasions in Peloponnese. In Kiparissia and in the wider area of Messinia the best products you will find are the olives and the olive oil, wine, honey, grapes, raisings, figs, citrus fruits, balsamic vinegar and handmade pasta.

You might hear some people calling this place Arcadia, because of the Arcadians which found shelter here from the Slavic invasions during the medieval years. Kiparissia preserves its name since the Homeric Age. According to some traditions the name Kiparissia is due to the cypresses (Kiparissia means cypresses in Greek) that surrounded the city and according to other traditions the name derives from Kiparisso. According to the myth, Kiparissos was a good friend of the Greek god Apollo, who was beloved in the city. One day Kiparissos killed a deer. He was in deep depression after his action and was praying to Gods, who transformed him into a cypress as an indication of sympathy. Besides Apollo, the city honored also the Greek goddess Athena and the god Dionysus.
This town has great history and dates back to the prehistoric times. In the Homeric period Kiparissia was a part of the Kingdom of Pylos, which was ruled by King Nestor. According to Homeric poems Kiparissia which was then called “Kyparissientas” sent 11 ships in order to help with the Trojan War. Its strategic place was the reason that many wanted to take over the city. Spartans took over the city along with the rest districts of the Messinia region. During the Byzantine years, the citadel of the city was reformed into a castle and later the Turks and the Francs rebuilt the castle which ended up to the form it has today. In the city, there are tombs from the classical and the roman years. Today the city still remains an agricultural and commercial centre of the area.

The beautiful sandy beach Ai Lagoudis in Kiparissia is awarded every year with the blue flag for its clear turquoise water. It is an organized beach with sun beds and a variety of cafes and restaurants.
Just 2km south from Kiparissia you will find Gianitsena beach. The beach is covered with sand and pebbles and has amazing crystal clear water.
The Kartelas beach can be found 3km north from Kiparissia. It is an endless beach covered by sand and pebbles. The beach is organized with sun beds and is ideal for nature enthusiasts as there are many nests from the protected species of the turtle Careta-Careta.
The partly organized Sani beach is 5km north of Kiparissia with a coast of 800 meters. In case you might need to eat something you will find here a canteen and a restaurant.
A little further, 6km north of Kiparissia, you could visit the Sergiani beach. The beach has shallow water and is covered by sand and pebbles.
If you want to enjoy some peaceful and relaxing moments, visit Terpsithea beach, about 6km south of Kiparissia.
One of the most popular beaches in the area, Kalo Nero beach is only 7Km north of Kiparissia. It is an endless sandy beach, very popular summer destination with a variety of water sports for the visitors. Above the beach there are a lot of cafes and fish taverns which satisfy the needs of every traveler.

While walking the “upper city” you will feel the historical breeze of the area especially while heading to the trademark of the city, The Castle of Arcadia also known as the castle of the giants. Ramble around this Frankish castle with the cyclopean walls and admire the beautiful view of the Ionian Sea. The castle changed hands a lot of times during the history until the Greeks finally took charge of it after the Battleship of Navarino in 1827. You will find here remains from the Ottoman occupancy of the castle, like an ottoman bath and a mosque of the sultan Suleiman. Also the Tower of Justinian is preserved in the east side of the castle. Around 1970 an outdoor theater was built in the castle in order to host cultural events.
While you are still in the upper city you could also pay a visit in the Folklore Museum, which is near this the area.
In the upper city (old city) of Kiparissia you will find a lot of churches and chapels to visit, like the historic church of Agia Triada (St. Trinity). It was built during the second half of the 19th century and is an ideal place for those who would like to pray. Also the view from this church is amazing. The church of Agios Dimitrios can also be found in the old city.
In the wider area of Kiparissia you will also find churches that worth your visit. For those who would love some hiking you could try visiting the chapel of Ai-lia, which is in the top of the mountain Aigaleo/Psichro. In the mountain Psichro you will also find the Monastery of Kamtsikada, about 9km northeast of Kiparissia. The monastery is surrounded by trees and offers a magnificent view to those who visit this place. If you want some piece of mind you should definitely visit this amazing place.
If you would like to enjoy the most magnificent view try to get up to the highest point of Kiparissia. You will see there the water tank, called “Dexameni” in Greek, which was built during the Ottoman occupancy and provides water to the city until today. Here you will see a monument which is dedicated to the “Arcadian Mother”, to all those mothers who gave their lives during the battles of Greece. Enjoy the sunset here which is said to be one of the best sunsets in the world!
Only 8km away from Kiparissia, you have the chance to visit one of the most important sights of the Early Mycenaean period, the Archaeological Site of Peristeria. This site is often called “Mycenae of West Peloponnese” and here you will see three vaulted graves from the Mycenaean Period. The findings of these graves are priceless and today are exhibited in the Archaeological Museum of Chora, which is located in Messinia about 31km from Kiparissia.
From the northern part of the Archaeological Site of Peristeria starts a hiking trail that ends up to the Gorge of Stalactites. It is a beautiful route of about 30 minutes that will excite all the nature lovers.

Kalo Nero is a seaside settlement only 7km away from Kiparissia. It is also a great summer destination with amazing sandy beach and a lot of options in terms of accommodation. Keep an eye here for the protected species of the turtle Caretta-Caretta.
About 14km south of Kiparissia is Filiatra, the beautiful small town with the beautiful square, the byzantine monuments and the replica of the Eiffel Tower.
A little further from Filiatra, about 26km from Kiparissia, you will find Marathos also known as Marathopolis. This beautiful fishing village is an ideal destination for those you would like peaceful holidays, long sandy beach and fresh fish in the local taverns.
About 53km away you might want to visit Neda which is the most beautiful river in Greece. For those who love activities during their holidays you could try the river trekking of Neda and enjoy the magnificent scenery with the waterfalls. 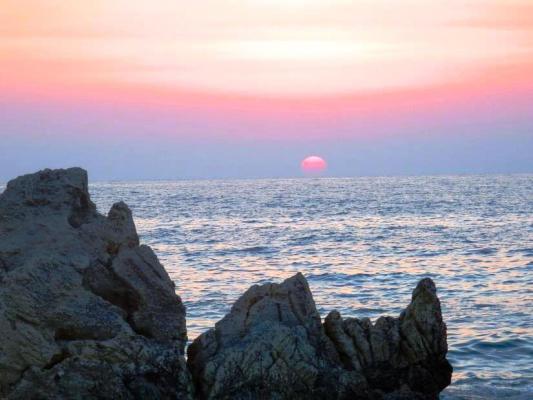