It is an elegant seaside village which consists of traditional stone houses with tiled roofs, a charming old city with imposing historical towers, little pebble bays, olive trees and cypresses. It is a popular destination for many nature lovers and artists from Greece and Europe. In the area the visitor will find tasteful hotels, restaurants and bars.
The city exists for over 3000 years. The name of the city derives from the Antiquity. Specifically, according to Homeric poems, Kardamili was one of the 7 states that Agamemnon had promised as a dowry to Achilles in order to lure him back to the battles of the Trojan War. In addition, the ancient Greek traveler and geographer Pausanias visited the city in 170AD and has mentioned it in his work “Laconica”.
Just across the south part of the settlement there is the Meropi island, where exist even today ruins from Venetian walls and also a basilica dedicated in the Assumption of Mary.

The visitor must definitely visit the “Palia Kardamili”, the old city which is in fact the deserted historical settlement placed on the foothills of mountain Taygetos. You can go either by walking through a stone path (about 10 minutes) or by car. In the settlement you can visit the Tower of Troupakis Mourtzinos, which belonged to Mourtzinos family. Mourtzinos family and the opposing force Mavromichalis family were historically in charge of the Mani district. The Tower of Troupakis Mourtzinos was built in 1807 and includes a building complex. In the January of 1821, the general of the Greek army, Theodoros Kolokotronis came here in order to organize the battles of the Greek War of Independence against the Ottoman Empire. From here, Theodoros Kolokotronis together with the other leaders and with the 2500 residents of the Mani area marched in order to take over the cities of Kalamata, Tripoli and Nafplio. Inside the building complex you will find the following monuments:
• The prior church of Agios Spiridonas
• The gate of the internal fortification walls
• The tower house which was initially constructed during the second Venetian occupancy in the area and was restored in the beginning of the 19th century. It is a three-storey building with the ancillary facilities on the ground floor and the living spaces on the upper floors. The architecture of this building emphasizes its defensive function.
• The tower was the last shelter of the residents. According to an inscription it was built between the 17th-18th century and was restored in 1808.
• The forge. The findings of this building indicate the existence of a forge, which is the only one that has been found in the area of Mani.
• The cistern is located on the ground floor of the tower house and was used for the water supply of the residents.
• A vegetable garden existed in this area for the cultivations of the family.
• The oil press couldn’t miss from this building complex as the olive oil is the most valuable product of this area. You can still see the large millstones of this facility.

Just a little further from the old city “Palia Kardamili” there is the monument of the tombs of Dioskouron which are two tombs carved inside the rock. According to the tradition, these tombs belong to Dioskouri who are the two mythical children of the Zeus and Lida, a queen of Sparta.
North of Kardamili there is the Petrovouni settlement, which took its name from Petrova, who established the settlement. In this village you will find two monasteries of great historical importance. In Zoodochos Pigi monastery there is the holy image which was transferred around the villages of the wider area during the past. The second monastery is known as Karaveli and was built in the 14th century. During the Ottoman occupancy the monastery operated as secret school and after 1821 it became a nunnery. Both of the monasteries are today deserted.
About 15km north of Kardamili (20 minutes by car) you could visit another exceptional historical monument of Mani, the Castle of Zarnata, also known as Castle of Koumoundouraki. It is located near the Stavropigio settlement and is one of the four large castles of Mani district. The external precinct of the castle is built on the walls of a prehistoric acropolis, probably of Enopi. The castle of Zarnata was built by the Turks in the middle of 17th century according to historic sources. In 1684 a committee of residents of Mani sent a letter to the Venetian generalissimo Francesco Morosini to inform him about the Castle of Zarnata which the Ottoman conquerors constructed in their area. In this castle found shelter the captain of Stavropigio Panagiotis Koumoundourakis who was the fourth bey of Mani district. The new bey of Mani, the Turks and other captains of Mani initiated against Koumoundourakis and only Theodoros Kolokotronis tried to help him due to their friendship. Zarnata was during the Ottoman occuancy the wider area of ancient Gerinia and not only the limited area of the castle as it is known today.

Ritsa beach is the most popular in this area. It is an organized pebble beach with a nice view of the mountain Taygetos. In the area you will find beautiful taverns to visit after swimming. On the hill above the Ritsa beach you will see a complex of deserted houses of the 20th century which are known as the ruins of Lazos.
Only 2 minutes away by car there is Kalamitsi beach. This beach is ideal for families with small children due to the crystal clear shallow water. The pebble beach is surrounded by cypresses.
Depending on your mood you could continue by car towards the South and discover the even more beautiful beaches like Foneas beach and Delfinia beach.

For those who love hiking, Kardamili offers a lot of marked hiking trails of the Biros Gorge that end up to beautiful byzantine churches. The area offers hiking trails of different levels of difficulty. Except the natural beauty of the gorge the place has historical importance too. It is considered that here was the royal road which connected Ancient Sparta with the harbor of Kardamili during the Antiquity.

For those who love the crowded beach destinations, then the Stoupa village is a must! It is a popular destination with beautiful beaches and only 7km away from Kardamili. This destination is also ideal for those who love the story of “Zorba the Greek”, the novel of the Greek author Nikos Kazantzakis. In this place you will recognize the landscapes which are described in the book. Many Europeans have visited this place because of the book and some of them even bought houses in the area.
Kardamili could be a good starting point for excursions in the traditional villages of Taygetos. Tseria is one of those villages which you could visit ideally in the spring when you will have the chance to admire the beautiful view and the orchids from the gorge Ridomos. Kastania is also a traditional village with stone houses and byzantine churches. Exochori is a great option and mainly known to the climbers as it is the starting point for the climbing of mount Taygetos. Milia is also one of the traditional stone villages with wild natural beauty. 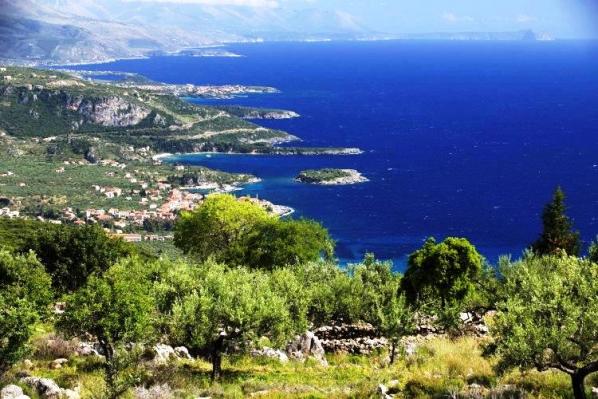