Ermioni is a small fishing town of Argolida at the east of Peloponnese. The traditional taverns, the cafes, the paved streets, the beautiful houses, the nightlife and the crystal clear beaches around this area are some of the reasons this town is one of the most popular summer destinations of Peloponnese. While travelling around this area you will have the chance to admire the olive and the pine trees and plenty of bays with turquoise water.
Wandering around this town you will definitely feel like you are on an island. You can walk on the paved streets until the slope of the ancient hill “Pronos” where you will find the beautiful chapel of Agia Kiriaki. When you arrive at the chapel you will be rewarded with the beautiful view of the sea and the plains where olive trees, citrus trees and pomegranates are cultivated.

Dryopes, a tribe of Ancient Greece, established the city of Ermioni. The history of this city goes way back in time and as we know from the Homeric Poems the city participated in the Trojan War. After the famous Dorian Invasion, the Dorians dominated the wide area of Argolida including Ermioni. During the 5th century BC, the city was developed in terms of economy. The main activities of the city were agriculture, fishing, shipbuilding and the trade of a natural dye called Tyrian purple which was produced by a sea shell. This color was used widely for the clothing of the kings. The city played an important role during the famous Persian Wars and also during The Peloponnesian War between Athens and Sparta. The city was conquered by the Romans at 146BC.
During the Roman period the city was destroyed several times due to pirate invasions. Later the city developed especially during the 2nd and 3rd century AD. In 1210AD begins the period of the Frankish occupation in the area and in 1388 the city was handed to Venetians. After the Venetians, the area was occupied by the Ottoman Empire until the Greek War of Independence in 1821. Many residents of Ermioni fought bravely during the battles against the Turkish army in Peloponnese. Today the main economical activities of this area are tourism, agriculture and fishing.

The visitor who loves folklore will definitely appreciate some of the special festive occasions in this area. In the holiday of Epiphany (every 6th of January), young people all over the Greece dive into water to catch the Cross and the image of Virgin Mary. Specifically in Ermioni, during the dawn of the 6th of January, young people dress up like sailors, visit the houses of the village and receive wishes and treats. These young people are singing a traditional song called “Yala-Yala” while visiting the houses and also in the morning until they dive into water.
At the night of Easter the residents place an effigy of Judas at a spot in the harbor. The residents gather around this effigy and set it on fire. Traditional music, dances and fireworks also take place during this festive occasion which is called “The burning of Judas”.
In Ermioni, starting in the 15th of July until the first days of August, takes place an international music festival. In this festival gather choral groups, symphony orchestras and soloist from all over Greece and abroad. This festival is a great opportunity to learn about the large variety of the traditional music of Greece.
The Feast of the Pomegranate is a local festive occasion which began in 2011 in order to promote the sweet flavor of this tasteful product. Besides Pomegranate, the olive oil of this area is also famous. Don’t leave without tasting some!

The Venetian Castle of Thermisia was one of the most important fortresses during the Frankish occupancy in the area. It was built around the 12th century AD. The castle changed hands many times during the years and today you have the opportunity to wander though the preserved parts of the castle. Except the castle you have another one good reason to visit the area, the lagoon of Thermisia. The lagoon was used as a salt pit from the Venetians and today is an important biotope and hideout for many rare migratory birds.
About 15km away from Ermioni there is the cave of Frachthi which is one of the most important caves in Europe. The first inhabitation of this cave was around 40.000BC and according to indications it was continuously inhabited during 20.000-3.000 BC. The findings of this cave can be found in the Archaeological Museum of Nafplio. The most important finding of this cave is a human skeleton which dates back 8.000 -10.000 years ago. The skeleton belonged to a 25year old man with 1,56 meters height.
The world known Epidaurus is quite close to this area, about an hour by car. You could participate in a guided tour of Epidaurus and learn all about the history of this extraordinary monument which operates until today as a theater.

There are several hiking routes the visitor could choose in this area. Don’t miss the one that reaches the Agia Kiriaki chapel as mentioned above. Except this route, another one you shouldn’t miss is the route towards the location of Milos. This route ends up on the hill Krothi where you will find the chapel of St. Gerasimos. When you arrive there just relax for some time and enjoy the view.
About 5 km away from Ermioni there is a great hiking opportunity in Katafyki Gorge. This route is suitable for all the family due to the easy trail of only 2,5kilometers. The wild beauty of this gorge will astonish you.
Water ski, diving and sailing are some of the water sports you could practice here. You will also find a diving centre in the area.

The closest beaches in Ermioni are the two pebble beaches of Bisti which can be reached on foot. It is also a great hiking opportunity as you hike through the homonym pine tree forest (Bisti) in order to reach them. In this peninsula the wanderer can also discover the ruins of ancient sanctuaries as well as the ruins from medieval and cyclopean walls. Near Bisti, there is also a small sandy beach called Maderi.
In the settlement of Dardiza, just 4km away from Ermioni, you will find two pebble beaches. The long one is quite crowded whereas the small one is more peaceful.
A few kilometers south of Ermioni you will also find a lot of beautiful beaches to spend your time. Sedoni beach is one of the about 6,7km away.
Also south of Ermioni, about 7km, you will find Kouverta beach. It is the biggest sandy beach in the area with crystal clear water. This one should be on your list!
A little further from Kouverta beach you will find Bourloto beach. It is a sandy beach surrounded by rocks which offer a natural shadow.
Petrothalassa beach is also a popular in the area due to the golden beach with the clear water. The beach attracts also people who love water sports. In the area you can find hotels and rooms to let in case you want to spend your night here.

From the harbor of Ermioni you have this unique opportunity to visit the beautiful island of Hydra. Hydra is one of the most cosmopolitan and graphical islands of the Argosaronic gulf. It is located very close to the mainland and the main town of the island, also called Hydra, has about 3000 permanent habitants. As the local plain architectural style is completely harmonized with the environment, the visitor will be excited with the combination of the white and grey of the buildings with the Greek blue of the sea and sky.
Kranidi is about 10km west of Ermioni. You will enjoy walking among the neoclassical buildings of this town. If you decide to make the trip don’t forget to visit the church of Agia Triada Pikrodafni (St. Trinity). The church is located between Ermioni (about 5,7km away) and Kranidi. The church was built in 1245AD and is an important byzantine monument of the area. The church is also called Pikrodafni which means oleander. This is because of these beautiful white and pink flowers that flourish in the area.
If you are in mood to travel a little further you could go to Porto Heli, a beautiful natural harbor that stands out as a summer destination. The main features here are the luxurious villas, the pine trees and the beautiful places to swim which excite celebrities, families, water sports enthusiasts and travelers who get excited by the cosmopolitan atmosphere of the area. 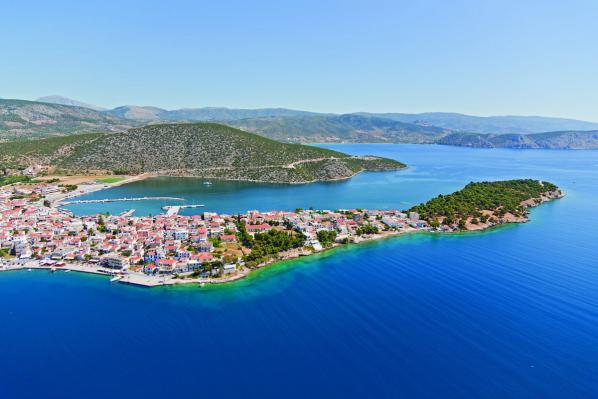