Areopoli is a well preserved historical town with stone paths and traditional tower houses which were built for social and defensive reasons. The town took its name from the Greek God of War Ares and was the capital of the historical district of Inner Mani (Mesa Mani). Like the rest of the Mani settlements, Areopoli is known for the contribution during the battles of Greece against the Ottoman Empire.
At the central square of the village “Platia Athanaton” you will come across the statue of Petrompeis Mavromichalis, the famous chieftain and offspring of the Mavromichali family. Mavromichalis family originated from Areopolis and is widely known for their fighting spirit during the battles of Greece. Around the central square there are a lot of traditional restaurants and cafes.

Around the area of Areopolis there are indications of inhabitation during the Paleolithic period. West of Areopoli there is the Cave Apidima. The systematic researches of this cave revealed findings of great importance for the prehistoric times in Peloponnese and the Paleoanthropology.
It isn’t clear even today when the city of Areopolis was established. According to tradition, the town was founded by the descendants of Michalis Kardianos, who was the founder of the majority of villages in Mani. According to some other beliefs the town was founded by two brothers who found shelter from the Turks in the nearby Oitylo. The population of this settlement was significantly increased and therefore they relocated to their new settlement in Areopoli which was initially called Tsimova until 1836. The name Areopoli was given later by Othonas, the first king of Greece in order to honor the martial bravery of the residents.
The fighting spirit of the residents of Areopoli resulted in the formation of the first armed groups in this area before the outburst of the revolution. Areopoli is considered to be the first city which raised the flag of the Greek Revolution in 17 March 1821. In the National Historical Museum of Athens you could still see this white flag with the national symbols and phrases. The flag has a blue cross in the middle. Above the cross there is the phrase “Victory or Death” and was the motto of the residents of Mani who played a leading role during the Greek War of Independence. Under the cross there is the phrase “I tan I epi tas” and was the phrase of the women in ancient Sparta. The women in ancient Sparta said farewell to their sons with this phrase which meant that their sons would either returned as winners or dead.

The tower of Mavromichali family (or tower Stilianou Mavromichali) in Areopoli is a historical monument. According to inscriptions, the tower was built in 1760 and the house in 1839. It is a four-storey tower surrounded by the building complex. The building housed the secondary school of Areopoli from 1890 until 1930.
The Pikoulaki tower is also a historical monument of Areopoli. It belonged to the famous family Pikoulaki known for their fighting action during the battles against the Ottoman Empire. The building complex included the tower, a house and an ancillary building. The tower was built according to the indications before the Greek War of Independence. The house according to the inscription of the house was built by Pikoulakis in 1850. In this tower you will also find the Byzantino museum of Areopolis with exhibits from the byzantine monuments of Mani.
Around the village you will encounter even more traditional tower houses, some of them have reformed into beautiful hotel complexes.

The churches of Areopoli

The Taxiarchis church with the impressive bell tower is the landmark of this city. It is located in the historical square (called 17th March 1821) of the city. This church is widely known for being the place where the residents of Mani participated in the liturgy before they swore “Freedom or Death”. This phrase was the motto of the Greek War of Independence in 1821 against the Ottoman Empire and reveals the determination of the Greeks to finally get rid of the Ottoman occupancy. On this historical square the flag of the Greek Revolution was raised. If you take a closer look you can still see the hole of the flag, which is the only spot of the square that hasn’t been touched since the 17th of March in 1821.
In the Niarchakos square you might like to visit the double temple of Panagia (Virgin Mary) and Agios Charalampos. Here you will see wall paintings from 1869 and the bell tower with the stone reliefs.
In the west side of the city you will see the small austere churches of Agia Triada (St. Trinity), Agios Petros and Agia Kiriaki.
In the Athanaton square you will find the temple of Agios Athanasios.
Amazing wall paintings of 1746-1868 there are on the church Ai Giannis Prodromos of the Mavromichali family. The same family had also the church Panagia Georgianiki which is known for the remarkable images of the iconostasis and the stone reliefs on the outside walls.
In the wider area of Areopoli there are even more religious monuments that you might like to visit, like Panagia Tsipiotissa with wall paintings of the 18th century.

In Areopoli and in the wider area of Laconia you will find restaurants with specialties of the traditional cuisine of Mani district. The protagonist of this cuisine is the pork. Mainly roasted suckling pig, sausages and salt pork are on the menu of the restaurants. The local specialty “Sigklino” is salt-cured pork which is smoked and later boiled with olive oil and oranges. Homemade pasta accompanied by local cheese and wild greens are also delicious. You could also try, “Kagianas”, which are fried eggs with tomato and cheese or “Lalagia”, which are fried dough strips.

In Karavostasi you will find a beautiful pebble beach. Also in the beautiful Limeni settlement there are special stands from which you could dive into water. Small peaceful beaches mainly covered by pebbles can be found throughout the west side of Mani peninsula.

Only 1,5km away you will find the village Sotiras also known as Kouskouni. It is an amphitheatrically built village with a beautiful view to Areopoli. There are plenty of churches that you might like to visit here like the church of Panagia (Virgin Mary) with the wall paintings and the church dedicated to the Transfiguration of Jesus.
About 4,5km away from Areopoli you will find the picturesque seaside settlement Limeni, which was the historical harbor of Areopolis. You will see here the grave and the bust of Petrompeis Mavromichalis, the famous chieftain of the Greek War of Independence in 1821. In the edge of the bay there are special stands from which you could dive into the crystal clear water of the area. Visit one of the taverns and eat fresh fish next to the waves while gazing at the Tower house of Mavromichalis family. In Limeni you could also see the church of Agios Nikolaos and the deserted church of Panagia Vreti.
The harbor of Areopolis is Karavostasi / seaside Oitylo / New Oitylo. It is about 7,7km away from Areopoli. The pebble beach of Karavostasi area attracts a lot of travelers. In the seaside settlement there are beautiful hotels and traditional taverns.
Close to Karavostasi you could visit the historical village Oitylo which is surrounded by olive trees. Here was the Ancient Oitylo during the Antiquity which according to Homeric Poems was involved in the Trojan War. The historical Monastery Ntekoulou can be found in this village. In 1770 inside the monastery the historical treaty “Orlofika” was signed between the residents of Mani and Orloff which signaled the beginning of the revolution against the Turks in the southern Greece. South of Oitylo village there is another important monument of the area, the Kelefas Castle. It was built by the Turks in 1670 and in 1685 the residents of Mani and the Venetians dominated the castle. In 1715 the castle was handed to the Turks however the castle was gradually abandoned.
Pirgos Dirou is 7km south of Areopolis. In the harbor of Diros there is the world known Lake Cave Glyfada. During the boat tour you have the opportunity to admire all the amazing formations of the nature.

Areopoli can also be a starting point for a tour of Mani district. While heading towards the South you will find plenty settlements with traditional towers, stone houses and small peaceful bays covered by pebbles. South of Areopolis you will encounter Pirgos Dirou, the settlement with the famous lake caves, the much photographed Vathia village, the beautiful Gerolimenas settlement, Porto Kayo and Marmari beach and of course the Cape Tainaro, the southernmost part of the mainland of Europe. For your return you have two choices. You can either go back from the way you came or explore the east part of the Mani peninsula and end up to Gytheio. 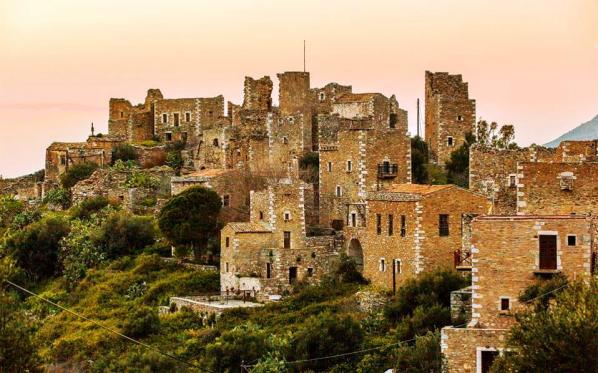