Ancient Messini is one of the most important excavated cities of Greece. The ancient city is well preserved due to the fact that it was never destroyed or covered by a newer settlement. Inside the archaeological site the visitor will find sanctuaries, public buildings, houses, fortifications and funerary monuments.
The archaeological site is located in a beautiful natural environment near the Mavromati village. The northeast part of Ancient Messini was protected by the mountain Ithomi which is a natural fortress. The imposing walls (about 9,5km length) protected the rest of the city.
Hippodamus was the ancient Greek architect and city planner who lived during the 5th BC and created a town planning called “Hippodamian”. This special town planning system was characterized by the principles of egalitarianism and isonomy which are also the fundamental principles of democracy. “Hippodamian” town planning was used in Ancient Messini. The houses of the citizens had the same size and were equal in terms of quality and access to public buildings and sanctuaries. The geometrismos of the hippodamian town planning is also obvious in the city but in the same time in complete harmony with the natural environment. The buildings of Ancient Messini have the same orientation.
Following the principles of the Hippodamian town planning, Thivaios Epaminondas and his allies from Argos established the city in 369BC. Ancient Messini became then the new capital of Messinia. The name Messini derived from “Messini” who was the first mythological queen of the area, the daughter of king Triopas and wife of the Laconas Polykaonos. According to mythology, queen Messini erected the sanctuary of Zeus Ithomata at the top of Ithomi. The worship of queen Messini dates back in the 10th century BC according to Pausanias. During the Hellenistic Period the queen Messini and Zeus Ithomata were the most important deities in the area. Another chthonic deity was Asclepius and was also intensely worshipped during this period, when the “Asclepeion”, one of the most important buildings of Ancient Messini, was constructed.

The Archaeological Museum of Messini

While heading downhill from Mavromati village the visitor comes across the Archaeological Museum of Messini. Findings from the excavations of Ancient Messini are exhibited in the museum and evince the importance of this city. The marble statue of Hermes is exhibited in this museum.

The Ancient Theater of Messini

After visiting the museum and driving through the olive groves and the vineyards, the visitor can see the theater of Ancient Messini. The theater was constructed during the 3rd-2nd century BC and was mainly used for cultural events and some political gatherings. According to historic sources, the ancient theater was the place where the king Philip V of Macedonia and Aratus of Sikyon met in 214BC.
The cavea of the theater was built on an artificial fill surrounded by the semicircular retaining wall. During the 1st -2nd AD the theater took its final form after some radical modifications. The residents of the settlement during the Early Byzantine Period converted the theater into a quarry and damaged severely the cavea of the theater. The analemma was the retaining wall of the theater and was built by large stone plinths. The form of this construction was similar to the fortifications of the city. The stage of the theater was replaced completely during the 1st -2nd century AD. The stage that exists until today dates back in the Roman Period and is well preserved.
The elements of the Ancient Theater of Messini influenced the theater manufacturing and this theater was the forerunner of the colossal Roman theaters and amphitheaters. The Ancient Theater of Messini was deserted during 3rd -4th AD.

The Arsinoe Fountain can be found between the Ancient Theater and the Agora. According to Pausanias the name of the fountain derived from Arsinoe who was the mother of Asclepius and the daughter of the mythical king of Messinia, Leucippus.
The fountain had an elongated tank of 40meters length in close proximity. On a lower level from the first one, there were another two tanks situated symmetrically.
During the end of the 3rd BC when the first building phase of the fountain took place, a Doric colonnade was in the façade of the building. During the second phase (1st AD) the colonnade was removed. In the third and last building phase of the fountain, two square-shaped cantilevers that protruded symmetrically at the ends of the façade were added to the fountain.
The fountain was deserted and unused since 360-370AD. However, the east part of the fountain was preserved and used during the Early Christian Period.

Fragments of thorakion made of local psamite gilded limestone have been found in this area. These fragments according to Pausanias descriptions seem to be related with the statue of Zeus which was located in the temple of Zeus the Savior. The sanctuary of Zeus the Savior has been discovered in this area. The sanctuary includes a Doric temple in the middle surrounded by arcades, like the sanctuary of Zeus in Megalopolis.
The remains of Doric limestones and the sculptured metopes which were found in this area are related with the temple of Poseidon which was also described by Pausanias. One of the metopes depicts Andromeda tied up on a rock and near her was a guardian dragon. The metope dates back in the 3rd BC.
The sanctuary of Demetra and Dioskouroi
At the northwest of Agora, near Asclepeion the sanctuary of Demetra and Dioskouroi was revealed after the excavations in the area. The building’s dimensions are 24x24 meters and its construction was completed between 4th-3rd BC. A large number of terracotta votive tiles and figurines have been found in this area. The sanctuary according to the indications was dedicated to the Greek chthonic goddess Demetra. Statues of Dioskouroi, according to Pausanias descriptions, existed in the sanctuary.

One of the most important buildings of Ancient Messini was the Asclepeion. Pausanias described the building mainly as a museum of artworks and less like a place where patients were treated.
More than 140 pedestals surrounded the Dorian temple. Statues mainly from politicians were placed on the pedestals. Outside the temple there is a squared forecourt that is surrounded by four arcades.
On the east side of the yard there is a complex of buildings and specifically the small roofed Ecclesiasterion, the Propylon, Synedrion or Vouleftirion and the hall of the Archives. On the west side of the yard there is a number of rooms with statues dedicated to Apollo, Muses, Hercules, the goddess of Tyxi and Artemis. On the north side of Asclepeion there is a building with two main halls. According to inscriptions, these halls have been related with the building called “Sevastion or Cesarion”. They were dedicated in the worship of the goddess Rome and the emperors.
The Asclepeion was erected after 215-214BC and aimed in the promotion of the Messenians as a strong nation of Peloponnese. All the sculptures of the Asclepeion were made by Damofontas with the exception of the chrysolite statue of Messini and the iron statue of Epaminondas.
The large Dorian Temple
The largest part of the forecourt of Asclepeion was covered by the imposing peripteral Dorian Temple and its altar. The temple consisted of pronaus, opisthodomos, cella and adyton. Adyton was separated by the rest of the temple and contained the chrysolite statue of Messini. However, statues of Asclepius haven’t been found in the area. According to Pausanias, Asclepius was mainly worshipped as a “Messenian citizen” and not for his healing powers.

Ithomi was the strongest natural and artificial fortress of Ancient Messini. From Ithomi the residents were inspecting the valley Steniklaros to the North and the valley Makaria to the South. The remains of the walls indicate that the length of the artificial fortification walls was 9,5km. Further fortifications have been found on the top of Ithomi near the area where the acropolis and the sanctuary of Zeus Ithomata were located.
The Laconian Gate
The Laconian Gate was in the eastern part of the city. In the 18th century the gate was destroyed due to necessary constructions in the area.
The Arcadian Gate
The Arcadian is the well-preserved landmark of the city. The monumental gate was made of rectangular limestone. It is a circular gate with two entrances, one internal and one external. The external entrance was protected by two towers. Hermaic steles were situated on both sides of the entrance. The Hermaic steles are explained also by the fact that Hermes was considered as the protector of gates. 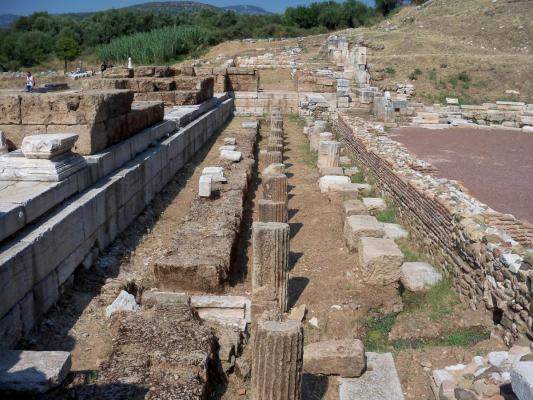 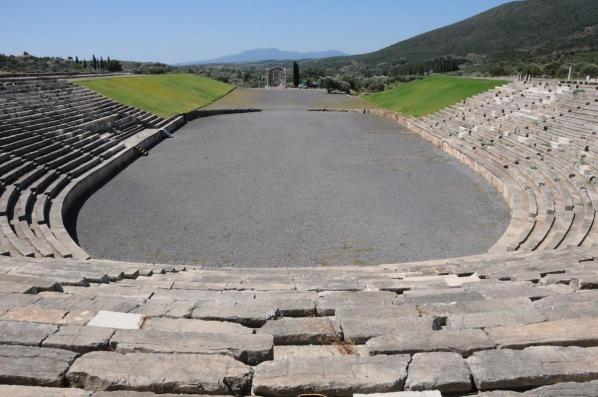