The history of Ancient Megalopolis

Ancient Megalopolis was situated at the northwest side of the modern Megalopolis on the banks of Elisonas River. The city of Ancient Megalopolis survived about two centuries however it was a significant city of Arcadia. Even the name Megalopolis which means “Big city” indicates the importance of this ancient city.
The history of the city started in 371BC when the Thebans prevailed over Sparta in the battle of Lefktra. This event was of major importance because Sparta was until then the dominant city in the area. The Theban general Epaminondas grabbed the opportunity to change the political situation.
Epaminondas established the city of Megalopoli in Arcadia in order to minimize Sparta’s sovereignty in the area. According to Pausanias, residents from forty surrounding Arcadian cities settled in Megalopoli. Some of those people settled in the city on their own free will while others were dragged violently. The residents of the Arcadian city “Trapezounta” refused to relocate and Arcadians slaughtered their population. The residents of Trapezounta who managed escaped the slaughter immigrated to Asia where they established the new city of Trapezounda which today is in Turkey (Trabzon).
These changes resulted in the creation of the Arcadian League, which was a federal league of many ancient Arcadian cities and Megalopolis became the capital. Megalopoli was protected by the Thebans who also provided the first garrison of the city, which consisted of 1000 men.
The construction and beautification project of the city lasted 10 years. The Ancient Agora included the sanctuary of Lykaios Zeus with the altar of Zeus and the statue of the Greek god Pan who was worshiped in the area. At the same area there was the bronze statue of Apollo (4 meters) which was transferred in the area from the Temple of Apollo Epicurius at Bassae. There were also many other important monuments like the “Philipeio Stoa”, the “Vouleftirion”, the temple of Akakisios Hermes etc.
Ancient Megalopoli became a very important and powerful city and managed to reduce the threat of Sparta. Spartans always desired to conquer Arcadia however the strength of the newly founded city and the Arcadian League intimidated even the warlike Spartans who waited until a more favorable time. In 364BC Sparta under the command of Archidamos marched against the city and lost. They tried again in 353BC when Spartans asked help from their rivals, the Athenians. However Thebans protected the city and managed to avoid the defeat.
In 338BC the residents of Megalopoli defended themselves once more against the Spartans. At the same time the “Big city” allied with Philip II of Macedon, who was the father of Alexander the Great. Philip even visited the city and the residents decided to build in the Ancient Agora the Arcade of Philip II “Philipeio Stoa” in order to honor him. During this alliance the hatred of Sparta against Megalopoli became even bigger as Sparta was opposed to Macedonia as well. When Alexander the Great succeeded his father many cities left the alliance but Megalopolis stayed on his side. He also visited the city and lived in a building across the ancient theater. He decided to take many residents with him when he marched against Asia. While Alexander the Great was in Asia, he was represented by the regent Antipatros, who helped the city of Megalopoli when it was attacked by Sparta during the known “Battle of Megalopolis” in 331BC.
After the death of Alexander the Great, the residents of Megalopoli along with other Arcadian cities rebelled against the Macedonians who under the command of Antipatros and Polisperchodas besieged the city with 20.000 infantry, 100 cavalry and 65 elephants, which was an unknown animal to the Greeks until that time. The residents of Megalopoli scattered spikes around the city and managed to neutralize the elephant danger. Due to the resistance of the city, Macedonians stopped the battle and Megalopoli allied with Kassandros of Macedonia who was the opposing force of Polisperchodas. Polisperchodas attacked Megalopoli once more in 318BC but couldn’t prevail over the city.
Spartans attempted in two important battles to prevail over Megalopoli but both failed. The first was in 265BC when the Arcadians under the command of Aristodimos defended themselves and the second was in 245BC when a strong north wind favored Megalopoli and forced Spartans to retreat in disorder.
In 234BC Megalopolis joined another big confederacy, the Achaean League. During this period lived the important general of Megalopolis, Philopoemen. He was in charge of many significant battles and led the Achaean League to become one of the most important military powers of Greece during this period. When the city of Messinia abandoned the Achaean League (184BC), Philopoemen marched against Messinia with his cavalry but he was captured. He died after the Messenians forced him to drink a poison. The announcement of his death overwhelmed with grief and sorrow the cities of the Achaean League. Philopoemen in some historic sources was given the title “the last of the Greeks” due to the significance of his military actions.

The decline of the city

The decline of the city started in 223BC when the Spartans violated the peace treaty and attacked unexpectedly the city of Megalopolis. The Spartans prevailed, destroyed the city and killed many residents. The city was rebuilt however it couldn’t return to its previous glory. Philopoemen fought against Spartans and won in the battle of Selasia. The last king of Sparta, Navis grabbed the opportunity and while Philopoemen was in Crete, he marched against Megalopolis and plundered the city. Since then the population decreased and the city was declined even more.
Megalopoli was taken over by the Romans like the rest of the Greece. In 170BC Romans took 1000 residents of Megalopolis in Rome as hostages. The famous historian Polivios was one of those hostages and he distinguished himself in Rome. The Greek geographer Strabon visited the city in 15BC and described Megalopolis as an insignificant small town. Around 170AD, Pausanias visited Megalopolis and found the largest parts of the city deserted.
During the Byzantine period many ancient temples and pieces of art were destroyed as idolatrous elements and Christian temples were built above the ruins of the ancient temples. The city of Megalopolis was relocated at the position of the modern Megalopolis. During the Frankish and Ottoman occupancy in Peloponnese there were some important historic events which took place in the city.

The archaeological site of Megalopolis is about 3km away from Modern Megalopoli. The site includes the ancient theater of Megalopolis, the Thersilio Vouleftirio and the remains of the Ancient Agora. Ancient Megalopolis was built on both sides of Elisonas River and therefore it was divided into two large parts, the northern and the southern part.

At the northern part of Megalopolis there was the Ancient Agora. In the middle of Agora there was the sanctuary of Lykaios Zeus, the sanctuary of Sotiras Zeus, the altars of Zeus, the marble statue of god Pan, the bronze statue of Apollo from Phigaleia and the statue of mother of Gods. Also the temple of “Akakisios Hermes” and the “Miropoli Stoa” were in this part of the city.
The excavations of English archaeologists revealed the “Philipeio Stoa” which was the arcade that covered the northern part of the Agora and was built in honor of Philip II of Macedon. The length of the arcade was 155,6m and the width 20m. The façade of the arcade had a Doric colonnade and inside there were two Ionic colonnades.
At the west side of the Agora there was the Gymnasion (training facility) of the Ancient Megalopolis and today the visitor can still see remains of the arcades and the buildings of this facility.

At the southern part of Ancient Megalopolis there were the most important buildings. Just across the Ancient Agora on the left side of Elissonas River there was the Ancient Theater which was built around 370BC. The Ancient Agora was connected to the Ancient Theater with a bridge. The Ancient Theater was the largest ancient theater of Greece which according to historic sources had a capacity of around 20.000 viewers. Poliklitos was the architect of the theater which was impressive because of its size and its exceptional acoustics. The theater was used for theatrical performances as well as for political gatherings. The excavations in 1890 were held by the British Institute and revealed the lower stone bleachers of the theater which are preserved until today and can be seen by the visitors.
Around the Ancient Theater there were some important monuments. Across the theater there was the “Thersilio Vouleftirio” which was the beautiful building where Arcadians gathered and discussed over important issues and decided about wars, truces and alliances. The capacity of this building was about 16.000 people, 6.000 seated and 10.000 standing. Only a few remains of this building are preserved. Important inscriptions and vases are exhibited in the Archaeological Museum of Megalopolis.
The Walls
Ancient Megalopolis was fortified by stone walls with perimeter of about 8,5km. The construction of the walls wasn’t quite elaborate and that’s probably why there haven’t been found any remains of them. 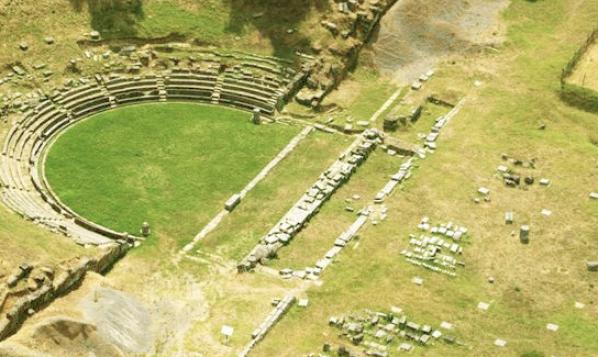 Hotels you can stay:
Palatino Rooms & Apartments
Activities you can perform:
Hiking
Tweet