THE PELOPONNESIAN CHALLENGE RACE On a relaxed conversationbetween two friends, Christos with his F 18 catamaran challenged Ali and his road cycling team to make the round of the Peloponnese in ten days.  And so a pioneering idea was born… 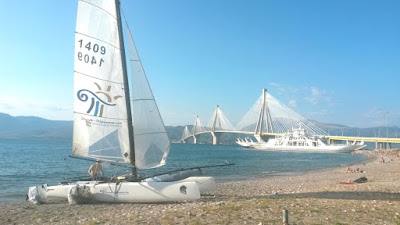 The purpose of this racewas the creation of a documentaryin order to promote the rich natural, historical and cultural resources of the Peloponnese through the prism of athletics.Thus, on 11 September 2015 with starting point Ancient Olympia, Christos with hiscatamaran  F18 and Ali with his bicycle and his team began their adventure.The athletes passed many points of high cultural, natural and historical interestsuch as Katakolo, Aegio, Ancient Epidaurus, Porto Heli, Astros, Monemvasia, Gytheio, Areopoli, Koroni and discovered many fascinatingcorners of Peloponnese.In sports level, the demands of the race were very high as both cyclistsand sailors hadto travel within ten days hundreds of kilometers, and especially cyclists 1.500 km and the sailors 550 nautical miles, while both teams had to confront the unpredictable liquid element, the roughterrain, the weather conditions andthe unexpected twists.Especially, the sailors’ team Discover-Peloponnese.comthe first two days of the race  they had a significant damage to the catamaran, it broke the steering wheel, which delayed them enough. Also, the boat tipped over under the bridge of Rio and in many parts fell to lull so they did not coverthe needing distance.  However, the highlight was on the last day where the sailors had to confront a strongstorm in the sea andthis cost them the victory.From the cyclists’ team, The Artisan Travel Company, they had to face the heat while riding midday withmore serious the accident of their leader who broke his leg. 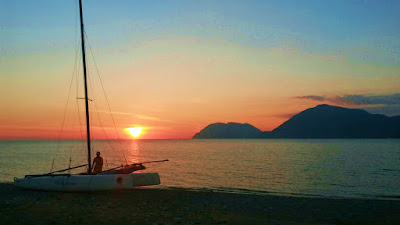 Finally, after ten days of adventure and suspense, the cyclists’ team finished first. Of course both teams feel happy and satisfiedthat completed successfully and safely this greatchallenge and met again to the point where it all started, but now with new memories that will follow them forever.Watch the promo video of the race here: https://www.youtube.com/watch?v=HZz7YQwrFVEWatch the website here: http://www.discover-peloponnese.com/event