This picturesque fishing village offers its visitors the most relaxing vacation. It is an ideal summer destination for those who want peaceful family vacation, for the couples in love and for the lovers of the nature.
The traditional settlement Sapouneika along with the Tiros beach is situated at the east coast of Peloponnese, under the mountain Parnonas, at the end of the Argolic Gulf. There are a lot of options regarding the accommodation, traditional taverns with fresh fish, cafes and bars. The clear beaches in the area, about 18 km coastline, are also a great reason to visit this beautiful area.
As you walk around this village you will feel the great tradition in the shipping and trade. In the 19th and 20th century the trading ships from Tiros travelled around the Aegean and the Mediterranean Sea. The locals were mainly seamen and fishermen. Today this place is growing in the terms of the tourism and the harbor also accommodates the tourist boats that visit the area.
During the Easter period, there are beautiful traditions that take place in this village, like the burning of Judas inside the Sea and many more that you shouldn’t miss if you happen to be in the area. Don’t forget to taste the local specialties like Eggplant with frumenty (trahanas), barnacles with rice and rooster with pasta.

Even from the prehistoric times Tiros was a harbor. It was the exit of Kynouria and Sparta in the Aegean and the Mediterranean Sea. The ancient settlement of Tiros was in the location where the ruins of the Castle Lygaria are today. In the same location was the ancient harbor. It is widely believed that this settlement was developed by the Phoenicians who dominated the trading activities in the Mediterranean Sea during this period. They chose this place to establish a settlement in order to enhance their economical activities. This theory is correlated with the homonym state Tyre of Ancient Phoenicia in Lebanon. Further researches in the area of Tiros have revealed ruins from ancient sanctuaries and fortresses that confirm the significance of the area during the ancient times. The sanctuary of the Greek god Apollo “Tyriti”, which was found in the area, is the reason of the region’s name “Tiros”.
During the Byzantine years the seamen of Tiros were in the service of the byzantine ships and the ships of the great captains from Spetses and Hydra. The great admiral Miaoulis who played a crucial role in the Greek Revolutionary War against the Turks has stated for the seamen of Tyros that they cannot be scared either from the storms or by the knives of the Turks.
In the 19th century, after the Greek revolutionary war, the people of Tiros were engaged in trading activities by the sea and transferred products of their historical area Tsakonia in all the great harbors of Aegean, Mediterranean and even the Black Sea. The heyday of Tiros was from the end of 1920 until 1960 when the sea trading activities reduced to the minimum. However the fishermen in Tiros are until today well known for their naval abilities.
Tiros is part of the historical Tsakonia, which significantly contributed during the Greek revolutionary war in 1821 against the Ottoman Empire. The singular feature of this area is the special language the locals use, the “Tsakoniki” dialect. Even the rest of the Greek people will find difficult to understand this special dialect which derives from the Doric language and is in fact a continuation of the Ancient Greek language.

In the wide area of Tiros, the visitor will find great options for swimming. The crystal clear water of the Tiros beach extends in the full length of Sapouneika settlement. It is a beautiful sandy pebble beach that attracts more and more tourists every year.
Only a few minutes away from Tiros, at the end of the slope with the pines and the olive trees, you will find the beautiful Tigani beach with the turquoise waters and the white pebbles. In this end of this beach there is the magical “Cave of the lovers” or “Furnaka” which can be visited only by boat. The distance from Tiros to Tigani beach is small and can be done on foot by those who want to take their time and enjoy the beautiful landscape.
Near Tiros, you will also find the Livadi beach, which extends under the homonymous settlement. The natural beauty of this beach won’t leave the visitor untouched. You might even consider stay a few days here, as there are options of accommodation and traditional restaurants. At the upper part of the slope there are the traditional villages of Melana and Pramatefti.
Kissakas beach is a small beautiful beach with natural beauty. The scenery consists of rocks, cypresses, pebbles and the crystal clear water.
A cliff with windmills divides the Tiros beach from the Lygeria beach, which is awarded as one of the best in the Mediterranean Sea.
Zaritsi (St. Christophoros) beach is a wonderful choice for swimming. It is equipped with organized camping, rooms to let and the taverns. Here you will see the characteristic chapel of St. Christophoros which hosts a feast every year on 9th of May.
In Tserfos beach you will an organized camping inside the shadow of olive and locust trees. There are also other options for accommodations and of course fish taverns. Tserfos beach is a beautiful multicolored beach with little pebbles and clear water.
Another beautiful beach of the area is Krioneri beach. While sunbathing, you might see the boat which supplies with water from the area in order to transfer it to the island Spetses. There are a lot of accommodation options in this area and for those who want to have a little more fun there is a beach bar in the area.

In the area you can do a variety of water sports like water ski and surfing. Fishing lovers will love this place and the fishermen tradition here goes way back in time. Alternatively, you could hike through a vast variety of the beautiful paths of the area.

About 20km south of Tiros you could visit Leonidio. It is a traditional settlement with beautiful beaches nearby. The huge red rock above the settlement dominates this village with the traditional houses and the remarkable architecture. If you like eggplants, here you will find all kinds of delicacies made of the eggplant of this area which is a PDO product.
Paralio Astros is only 32,5km away from Tiros. The beaches of Astros attract many travelers and area usually crowded. Atsiganos beach and Portes beach are the most beautiful and also most popular beaches of Astros. After you’re done swimming don’t forget to visit one of the local taverns to taste fresh fish. If you want a more peaceful vacation you could drive about 11km south of Paralio Astros and end up to Agios Andreas village. The peaceful beaches of the picturesque village are ideal for relaxation. About 8km away from Paralio Astros you could visit the historical Loukou Monastery. It was built during the 12th century and is dedicated to the Transfiguration of Jesus. 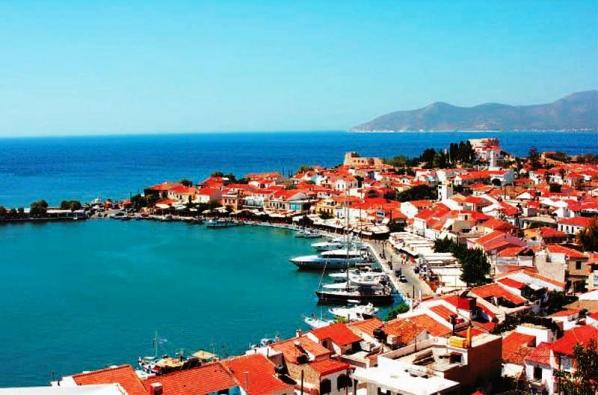