This traditional settlement of the southwest Mani is a popular destination not only in the summer but throughout the year. It is situated at the east side of the cape “Cavo Grosso”. Gerolimenas is in fact the picturesque harbor of the area which was an important trading spot in the past. This fact can be related with the name of the harbor Gerolimenas which means sacred harbor in Greek.
The traditional tower houses, the singular architecture of the area, the crystal clear water charm the travelers. Travellers will find everything they might need here, like traditional restaurants, fish taverns, luxury hotels, rooms to let and café bars. The two most important medieval towers have been transformed into hotel complexes.
According to historical sources, Gerolimenas was the place where Ancient Ipolas was located in antiquity. During the Turkish occupation this area was used as a starting point to pirates. In Gerolimenas you could visit one the most important religious monuments, the St. Nikolaos church and the homonym chapel which are made of stones.
Before leaving the area, don’t resist to the local products! Taste the olive oil, the honey, the cheese, the jams, the herbs, the pies etc. And of course pork! The specialty of Mani and of Peloponnese in general is the roasted pork which is served in every festive occasion. Also the local sausages and “syglino”, the salted pork shouldn’t be omitted.

One of the most photographed places in Mani district is the Vathia village. It is located about 10km away from Gerolimenas and about 15 minutes by car. It is not developed in terms of tourism so here you won’t find a lot of option in cafes and restaurants. However, the impressive architecture of the area with the imposing towers and the traditional stone houses won’t leave you untouched. The settlement was mainly built between 18th and 19th century. However the area was almost deserted after people moved to bigger cities and only during the recent years started to develop again. In the area you can visit the Kapi and Exo Kapi beach, two pebble beaches about 1,5Km from Vathia.
Between Vathia village and the Cape Tenaro, hidden between the hills is a probably the best sandy beach of Mani. Marmari Beach is like a secret paradise and a great opportunity to cool off a little. Only 3km away from Marmari there is also another beautiful spot of the area, Porto Kayo. Porto Kayo is a picturesque harbor with crystal clear water which magnetizes the travelers.
Driving to the South, about 17km from Gerolimenas and 25 minutes by car you will discover the Cape Tenaro the southernmost part of the mainland of Europe. The name of the cape derives from the mythical hero Tenaros who was a son of Zeus. In the area there is a cave called “Hades Cave”. According to Greek mythology this cave was one of the Hades gates for the Underworld. Hercules entered this cave in order to confront Cerberus. After Kokinogia settlement there is the church of Agion Asomaton. Taking the route on the right of the church, after 45 minutes, you will reach the impressive lighthouse, which was built in 1882. 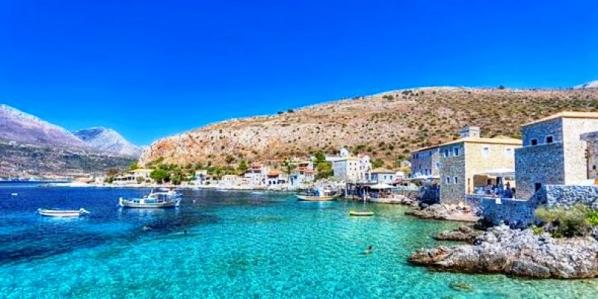