Imagine visiting a small town with a view of olive groves and vineyards that spread over the place and end up to the sea. Gargalianoi is this small town which is located in Messinia of Peloponnese and was built on the foot of the mountain Aigaleo. It is about 4km away from the Ionian Sea.
While walking in the central square of the town you will come across the Church of Our Lady. This church dates back in the 18th century and has an image with scratches which, according to tradition, were caused by the sword of Ibrahim who plundered the city. If you are in mood for some walking visit the Church of Profitis Ilias in the northern part of the city which offers a great view to the Ionian Sea and the Proti Island.
The seaport of this town is Marathopolis, the picturesque fishing village. Just across this port you will see the island Proti, known for being a pirate hideout during the past and today offers plenty of activities for its visitors. Don’t miss this chance to take a boat from Marathos and explore this interesting island.
While visiting this place taste or even buy for your loved ones as a souvenir some local products from this area especially wine and the exceptional olive oil.

Traces of inhabitation during the Early Helladic Period have been found in this area. In the antiquity this region was a part of the Kingdom of Pilos and was ruled by King Nestor.
Regarding the recent history of the city many residents of the area fought during the battles of the Greek War of Independence in 1821. During this war the city was utterly destroyed. After the end of the war the city was rebuilt and was developed into an important production centre of raisins until the beginning of the 20th century. Today the town is still known as the trading centre of the wider area.
In the city Gargalianoi, a famous Greek fighter was born. Telos Agras fought in the Macedonian Struggle (1904-1908). He died tragically in 1907 after he was betrayed by a Bulgarian dignitary and this fact pushed the Greek fighters to continue their battles with even bigger intensity. In his honor there is a festive occasion called “Agapinia” that takes place in Gargalianoi every year in July.

Marathopolis or Marathos
Marathopoli is the beautiful seaside village near Gargalianoi. The village offers a variety of hotels, rooms to let and camping sites for the visitors. While walking on the seaside street of Marathopoli you will find a large number of cafes, bars, gift shops and of course fish taverns serving fresh fish every day. The place offers a great view of the Ionian Sea and the Proti Island. The most popular festive occasions in Marathopolis are the Festival of Trasfiguration (6/8), the Assumption of Mary (15/8) and the festival of Sardine (every August).

Proti island
Just across the Marathopoli village you will see the Proti island. The island is uninhabited and can be reached by boats that depart from Marathos port. There are a lot of activities someone can do in the Proti island like swimming at the crystal clear “Vourlia” beach, discover the hiking paths of the area, scuba diving, snorkeling and rock climbing.
In addition Proti Island is of great historical importance. The island has taken its name from the sea god Proteus who was, according to Greek mythology, the son of the Greek god Poseidon. Mycenaean or Pre-classical ruins of the citadel, the wall and the circular turret still stand at their place. The church of Our Lady was built upon the ruins of the ancient temple of Artemis Efploias. Thucydides, the famous Athenian historian has mentioned in his work that the Proti Island was the place where the Athenian fleet of Demosthenes resorted temporarily at 424BC due to heavy sea. The fleet was heading from Zakynthos towards Pylos and the Sfaktiria Island where the battle between the Athenians and the Spartans took place. Except the Athenian fleet, there are also historic references about sailors and pirates who resorted at the island before they continued their journey. At the place “Grammeno”, which means written in Greek, there are about 30 carved inscriptions from different periods of time. These inscriptions are in fact prayers to the Gods in order to have a nice journey when they would leave the island. Many pirates from Mani district also used this island as a hideout. For example a pirate from Mani, Katoulias and his battleship “Spetses” had found shelter from the storm at this island in 1899.
One of the most visited places in Proti Island is the Monastery of the Assumption of Gorgopigi which is located at the north of the “Vourlia” beach. The name of the monastery was taken from the homonym picture that was found on the rocks of the island in 1984. The main festive occasions of the monastery take place every year on 23rd August and on 24th September.

The most famous beach that you can visit during your stay at the wider area of Marathos is Lagouvardos, which is a sandy beach of 2km. The beach is ideal for board and wind surfing and other water sports. Here you could also enjoy the charming sunset.
Another one you shouldn’t miss is Vromoneri beach, a beach that locals tend to choose. This beach isn’t organized and is in fact a small picturesque harbor covered with sand. It has stairs which help you dive into the water. The rocks at the edge of the beach are great for those who like snorkeling or diving with mask.
The Golden beach or Mati beach is a long golden sandy beach which is organized and very popular in the area. However the beach has also quiet spots for those who seek more peaceful holidays. The beach is about 11km away from Gargalianoi village. In this beach you could spend some time in the beach bar, in the tennis beach volley or in a number of summer activities like surfing, water skiing, jet skiing and canoeing. During the summer period you might be lucky and see the protected species of the turtle Caretta-Caretta who nest in the area. Keep in mind that this beach is different from the Golden beach which is near Gialova.
Romanos beach or Glifadaki as some locals tend to call this beach is also a great option near this area. It is about 14km away from Gargalianoi and offers a nice partly organized beach covered with sand.
Of course, Voidokilia beach can also be visited while you are in this area. It is about 15-20 minutes distance by car from Marathopoli and is one of the best beaches of Peloponnese. It is a beautiful sandy beach with turquoise water. The unique shape of this beach, which looks like the Greek letter “Ω” will astonish the visitor. The beach is not organized and there aren’t shops very close to this area so keep in mind to carry all the necessary equipment as well as water, food etc. From this beach you can see the remains of the Castle Paliocastro in the southern part of the beach. At the other side of this beach towards the North there is the archaeological site of the Mycenaean tomb of Thrasymedes, the son of King Nestor.
Between Romanos and Voidokilia beach there is a sandy beach called Petrochori. It is a partly organized beach that offers some peaceful moments to the visitors as there aren’t many shops near the beach. In case you might need anything there is the Petrochori settlement quite near the beach.

Gargalianoi and Marathos can be a perfect starting point to visit some beautiful locations of the wider area of Messinia.
The Palace of Nestor (about 25 minutes) is one of the best preserved Mycenaean Palaces in Greece. It was built during the 13th century AD and was the palace of the King Nestor. King Nestor is referred in the Homeric Poems as one of the most respected and wisest leaders of the Trojan War. The discovery of the palace took place in 1939 and researches in this area continue even today. A big fire destroyed the palace in the end of the 13th or in the beginning of the 12th century AD and the palace was never rebuilt since then. The numerous findings of this palace are exhibited today in the Archaeological Museum of Chora which is near the area while some other findings are in the Archaeological Museum of Messinia in Kalamata.
Travelling north of Marathos you will come across Filiatra, the city with the replica of the Eiffel Tower and Kyparissia, the city which charms the visitors with its beauty and the imposing Castle of Arcadia.
Towards the South near Gargalianoi you could also visit some great summer destinations like Gialova and its phenomenal lagoon or Pylos, the historical city where the Battleship of Navarino took place. Its shipwrecks can still be seen in the nearby coasts.
If you are in mood for walking and swimming at a magical location try to visit Polylimnio, about 40km away from Gargalianoi. Here you will find plenty of lakes that form waterfalls and create an amazing location. You can rest here and enjoy yourselves with some swimming. 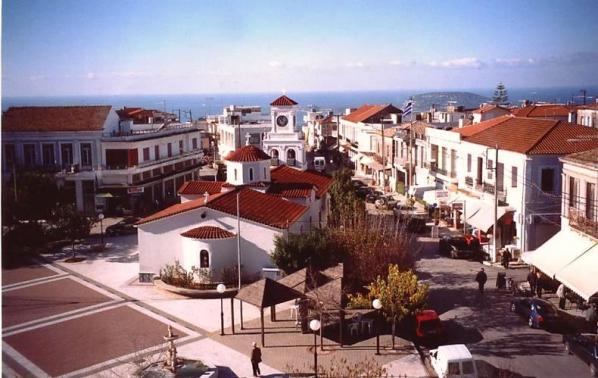